To identify qualities and characteristics that go into making someone a hero and the values and choices common to all heroes.

Use 1, 2, 3 rubric to assess students on their Venn Diagram completion and collaboration and understanding of the concept.

Common Core English - Writing K-5
4
Production and distribution of Writing: Produce clear and coherent writing in which the development, organization, and style are appropriate to task, purpose, and audience. 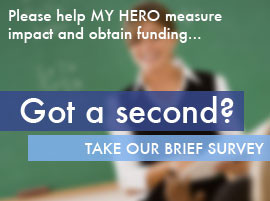