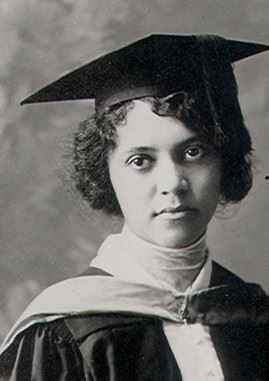 Alice BallUnknown author / [Public domain] via Wikimedia CommonsAlice Ball was born July 24, 1892. She was a pharmaceutical chemist who at 23 discovered an injectable form of chaulmoogra oil that cured leprosy (aka Hansen's disease). She isolated the compound that could be absorbed by the bloodstream and made it the most effective treatment for leprosy in the early 20th century.

She died at the age of 24 due to a laboratory experiment and did not receive credit for her contribution to science until scholars rediscovered her work decades later. At the establishment of a scholarship (The Alice Augusta Ball endowed scholarship) in her honor in 2017, Paul Wermager said: "Not only did she overcome the racial and gender barriers of her time to become one of the very few African-American women to earn a master’s degree in chemistry, [but she] also developed the first useful treatment for Hansen’s disease. Her amazing life was cut too short at the age of 24. Who knows what other marvelous work she could have accomplished had she lived."