Amanda Gorman: The Poet Who Healed a Nation 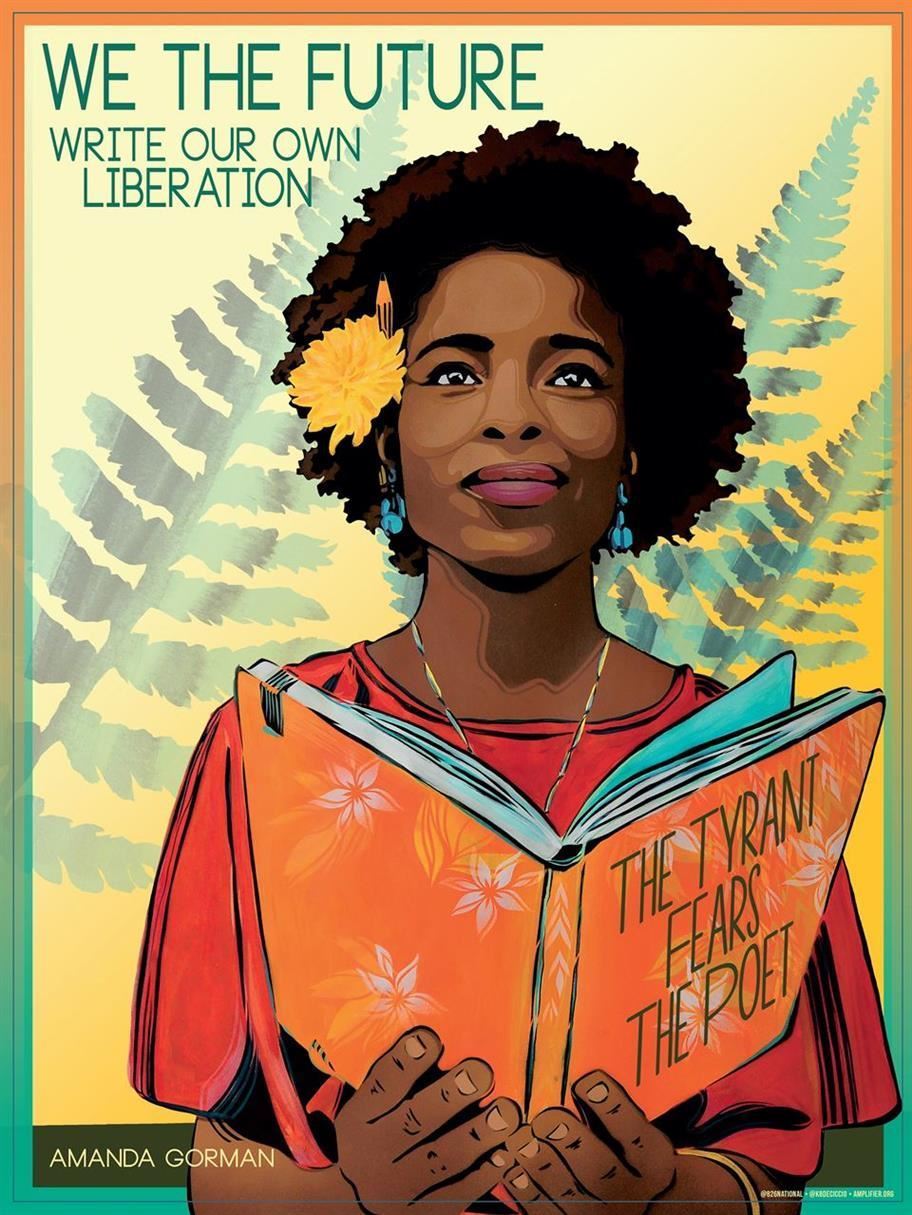 On Inauguration Day, January 20, 2021, America’s first Youth Poet Laureate Amanda Gorman delivered her original poem "The Hill We Climb" after the swearing in of President Joe Biden and Vice President Kamala Harris. Gorman stood at the podium, small of stature, wearing gold hoop earrings and a birdcage ring, gifted to her from Oprah. Her bun of braided hair with just a hint of beadwork was adorned with a large, red headband, which set off her bright yellow peacoat. As she delivered her poem, her hands made a dance to emphasize certain phrases, bringing her melodic words to life. White House guests looked moved as they sat donning face masks in this pandemic era—a difficult, stark moment in history when hope is needed more than ever.

Gorman’s words inspired a nation healing from the recent attack on the Capitol just fourteen days prior by white nationalists attempting to overturn the democratic process. The words brought comfort to inauguration guests who literally put their lives at risk to attend, as well as comfort to a nation watching from home with trepidation at the unknown. Gorman had amended her prepared poem after the attack in order to address it head on. She told The New York Times: “We have to confront these realities if we’re going to move forward, so that’s also an important touchstone of the poem. ... There is space for grief and horror and hope and unity, and I also hope that there is a breath for joy in the poem, because I do think we have a lot to celebrate at this inauguration.” 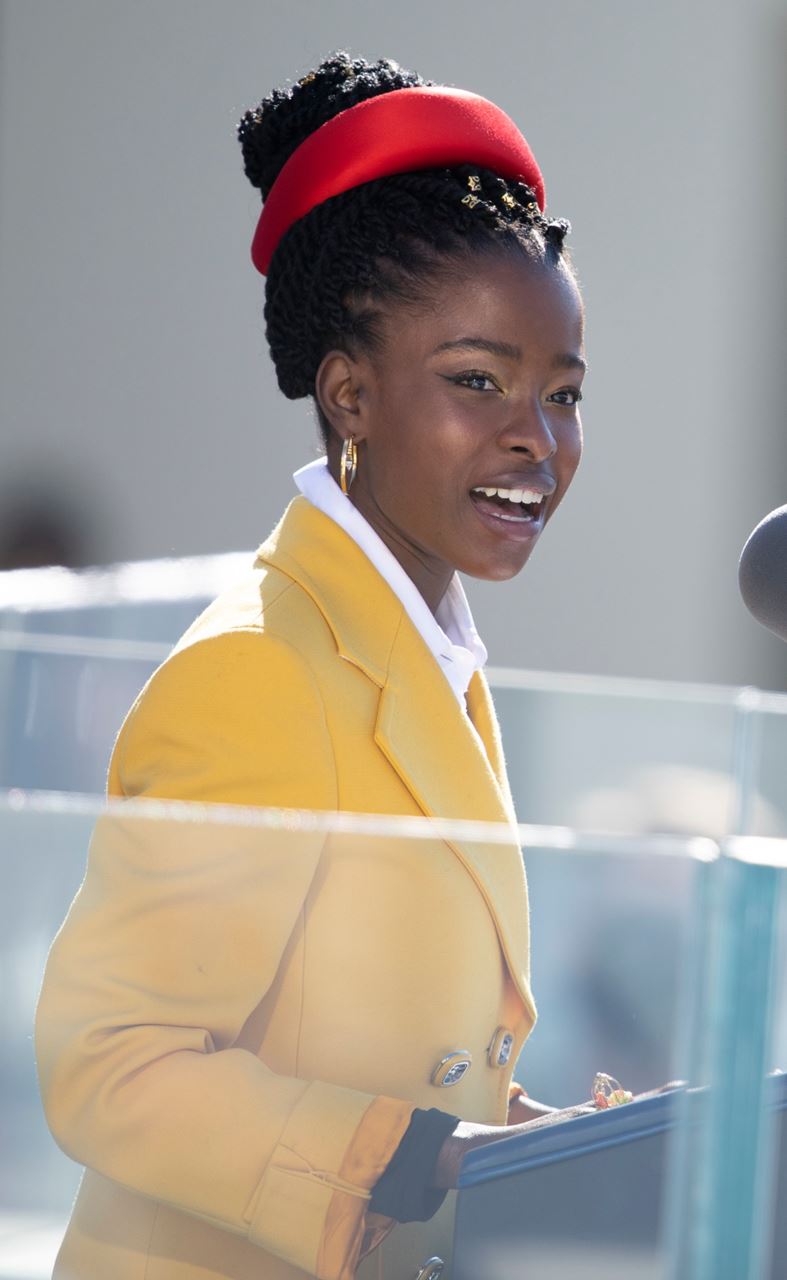 Amanda GormanChairman of the Joint Chiefs of Staff from Washington D.C, United States, CC BY 2.0 via Wikimedia Commons

Gorman and her family have been part of the MY HERO family for the past few years. Gorman’s twin sister, Gabrielle, won Student Honoree for her film Dear America at the 2015 MY HERO International Film Festival, held at the twins’ school, New Roads. They were raised by a single mother, Joan Wicks, who teaches middle school in Watts. Joan fostered creativity in her home by keeping the TV off and encouraging curiosity. Gabrielle went on to attend UCLA for cinematography and film and video production, while Amanda attended Harvard University, receiving a bachelor’s degree in sociology. Gorman was slated to recite a poem at her Harvard graduation last spring, which was canceled due to the coronavirus pandemic. Then two months ago, Gorman was invited to read at the inauguration by First Lady Jill Biden, who had seen her recite a poem at the Library of Congress.

Amanda Gorman overcame personal odds to be such a lyrical, powerful poet. Growing up, she wanted to use artistic expression as a way to help overcome her speech impediment. She told The New York Times that her pursuit of poetry as an outlet partly stemmed from socioeconomic necessity, as dance classes and paint were too expensive. She said, “To write I just needed a pen and a page.” Language was the perfect medium. In a recent interview, Gorman told CNN news correspondent Anderson Cooper that she used the song "Aaron Burr, Sir" from the musical Hamilton to practice saying her “R’s.” Persistence paid off, and Gorman delivered a flawless message from the podium, later receiving praise from Hamilton writer and star Lin-Manuel Miranda.

MY HERO Co-founder and Director Jeanne Meyers says: "It is so hopeful that Amanda has captured the hearts and minds of the nation with her wise message of truth, reason and the responsibility we each have to be brave and to be the light.”

Amanda Gorman's poem in full, below:

The Hill We Climb

When day comes, we ask ourselves, where can we find light in this never ending shade?

The loss we carry, a sea.

We've braved the belly of the beast.

And the norms and notions of what just is, isn't always justice.

And yet the dawn is ours before we knew it.

Somehow we do it.

Somehow we've weathered and witnessed a nation that it isn't broken, but simply unfinished.

We, the successors of a country and the time where a skinny Black girl descended from slaves and raised by a single mother can dream of becoming president only to find herself reciting for one.

And yes, we are far from polished, far from pristine, but that doesn't mean we are striving to form a union that is perfect.

We are striving to forge our union with purpose.

To compose a country, committed to all cultures, colors, characters, and conditions of man.

We close the divide because we know to put our future first, we must first put our differences aside.

We lay down our arms so we can reach out our arms to one another. We seek harm to none and harmony for all.

Let the globe, if nothing else say, this is true.

That even as we grieved, we grew.

That even as we hurt, we hoped.

That even as we tired.

We tried that we'll forever be tied together victorious.

If we're to live up to our own time, then victory won't lie in the blade, but in all the bridges we've made.

That is the promise to glade the hill we climb.

If only we dare it's because being American is more than a pride we inherit.

It's the past we step into and how we repair it.

We've seen a force that would shatter our nation, rather than share it.

Would destroy our country if it meant delaying democracy.

And this effort very nearly succeeded, but while democracy can be periodically delayed, it can never be permanently defeated in this truth.

In this faith we trust for while we have our eyes on the future, history has its eyes on us.

This is the era of just redemption.

We feared it in its inception.

We did not feel prepared to be the heirs of such a terrifying hour, but within it, we found the power to author a new chapter.

To offer hope and laughter to ourselves.

So while once we asked, how could we possibly prevail over catastrophe?

Now we assert how could catastrophe possibly prevail over us?

We will not march back to what was, but move to what shall be a country that is bruised.

But whole benevolence, but bold, fierce, and free.

We will not be turned around or interrupted by intimidation because we know our inaction and inertia will be the inheritance of the next generation.

Our blunders become their burdens, but one thing is certain.

If we merged mercy with might, and might with right, then love becomes our legacy, and change our children's birthright.

So let us leave behind a country better than the one.

We were left with every breath, my bronze pounded chest.

We will raise this wounded world into a wondrous one.

We will rise from the gold limbed hills of the West.

We will rise from the wind swept to Northeast where our forefathers first realized the revolution.

We will rise from the lake-rimmed cities of the middle Western States.

We will arise from the sun baked South.

We will rebuild, reconciled and recover and every known nook over our nation.

And every corner called our country.

When day comes, we step out of the shade of flame and unafraid, the new dawn balloons, as we free it.

For there was always light.

If only we're brave enough to see it.

If only we're brave enough to be it.

Celebrating We the Future-Amanda Gorman by Kate Deciccio