by Jessica from Vermont

Anne Frank had been in hiding from the Nazis for 25 months with her family and friends when the Gestapo found them. The house was searched for everything of value. One of the men found Otto Frank’s briefcase, where Anne’s diary was kept. He spilled the contents all over the floor, but Anne said nothing. Everyone appeared incredibly calm, and they stayed silent as the men pushed their only possessions of value out the narrow door. They were allowed to take five minutes to get ready. The eight gathered their belongings, but Anne didn’t take her diary. She left its contents strewn on the floor as she took her last look at her secret home, her life, the only world she had known for almost three years.

After the family was arrested, they were all taken to concentration camps. Edith Frank, Anne’s mother, died of starvation in Auschwitz on January 6, 1945, a day before the camp was liberated. Margot, Anne’s sister, and Anne herself both died of typhus in Bergen-Belsen, Margot in March, 1945 and Anne in April, 1945, a few weeks before it, too, was liberated. Otto Frank, her father, was the only survivor from the family (Anne Frank’s Timeline).

When Otto Frank returned and entered the now abandoned home and Annex, he noticed a drawer open in the antique wooden dresser in the corner. In the drawer there was a green folder marked in Miep Gies' handwriting, "Anne’s Diary." As Otto opened it, tears poured down his face. "This is all that is left of my Anne," he thought to himself. As he sat on the hard, cold, wooden floor, he began to read aloud the first page: "I hope I will be able to confide everything to you, as I have never been able to confide in anyone, and I hope you will be a great source of comfort and support..." (Frank,1995).

Anne was the type of person who always looked on the bright side of things. Even when she was in hiding, she never doubted the fact she would get out of there alive. She said as one of her first impressions of the Annex, "The Annex is an ideal place to hide in. It may be damp and lopsided, but there’s probably not a more comfortable hiding place in all of Amsterdam. No, in all of Holland" (Frank,1995). Most people would have been in severe depression if they were forced to leave their home for a place like this. She would also sometimes prefer the Annex to the outside, because it protected her from the dangers of the street. She referred to it once as "a little piece of blue heaven, surrounded by heavy black rain clouds" (Brown,1991). A hero should always be positive, and that is what Anne was. She never gave up hope, not until the moment she died.

Anne and her family lived in the Secret Annex for almost three years without ever once setting foot outdoors. This would require extreme patience just to be able to stay in the house for so long. In addition, the eight members of the house couldn’t move from 8:30 AM to 6:30 PM, so no one would hear them below. This called for even more patience, to sit still for ten hours straight. Anne must have been a calm, even-tempered person if she lived with the same eight people 24 hours a day, 7 days a week, for 3 years. This trait in Anne demonstrates why she was a great hero.

Anne Frank was a very strong and brave person. When she was younger, living in the Netherlands, her teachers described her as someone who always spoke her mind, someone who liked attention, liked to make people laugh, "a little comedian" (Brown,1991). They also said she was very mature for her age, had a good sense of herself, that "she knew who she was" (Brown,1991). She loved performing, especially in school plays. To keep herself strong, she used a diary she received for her 13th birthday as an outlet for her fear. "When I write, I can shake off all my cares" (Anne Frank: Her Life and Times). Her personality was strong, which in turn allowed her to show great bravery in life. She must have had to be extremely brave to sit in bed at night and hear the sirens, taking away friends and family. She also heard the bombs, the explosions as the war raged around her. For her to be able to handle this, and still go on living a semi-normal life, as recorded in her diary, proved that she was very brave.

By writing her famous diary, Anne Frank helped the world understand that the 6 million Jews killed in the Holocaust had faces, lives, and personalities. She has been called the "human face of the Holocaust," and her personal record of "her struggle to keep hope alive through the darkest days of this century has touched the hearts of millions" (Müller). She helped teach people that the Holocaust did happen, and it was a horrible thing. Without her help, the world would never know the intensity of the pain caused during this time. A boy, who was once so moved after he performed in a play about Anne, wrote to Otto Frank, and said that he realized that "not only does Anne stand for the Jews, but for any human being who suffered because of his beliefs, color, or race" (Brown,1991).

Anne Frank is a hero because she was optimistic, patient, unselfish, and strong. For some, she has been someone to look up to. For others, she has been a victim of wrongdoing that will help to prevent the same tragedy from happening again. She died unjustly. If she had lived, she could have been someone who was famous for her life, not her death.

Click here to listen to the Anne Frank story

Anne Frank wrote on the first page of her diary:

Anne Frank has been called the "human face of the Holocaust." The diary she kept for 25 months, when she was in hiding from the Nazis, is a life-affirming record of her spirit and hope in the face of cruelty and danger. Her words help us in our struggle to understand how to deal with the violence and hatred we find in the world today. 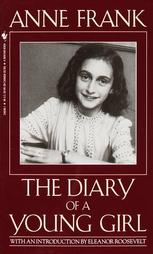