Binti Jua is the hero of the Brookfield Zoo in Chicago, Illinois. The 8-year-old western lowland gorilla rescued a 3-year-old child who climbed a railing and fell 18 feet into the zoo's exhibit. Zoo officials responded immediately, but it was Binti who got to the unconscious boy first and carried him to an area where the humans could attend to him. Her own 17-month-old baby, Koola, clutched her back throughout the incident.

Binti Jua was born in 1988 at the Columbus Zoo, which has one of the most successful gorilla breeding programs in the country. Her father, Sunshine, was from the San Francisco Zoo and her mother, Lulu, was from the Bronx Zoo. Binti's Aunt, Koko (Sunshine's older sister), lives at the Gorilla Foundation in Woodside, California. She is famous for her extensive knowledge of American Sign Language, which she uses to communicate with humans and her Gorilla-friend, Michael.

Binti Jua was hand-reared at the San Francisco Zoo. Hand-reared animals often lack the mothering skills they would have obtained in the wild, so in 1991 she was moved to Chicago to be trained for motherhood. Binti Jua seems to have learned her lessons well. The little boy Binti Jua saved spent 4 days in the hospital and was then released. Binti Jua's gentleness made her a hero. 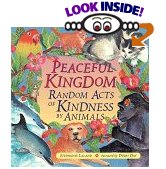 Click here to listen to the Binti Jua story