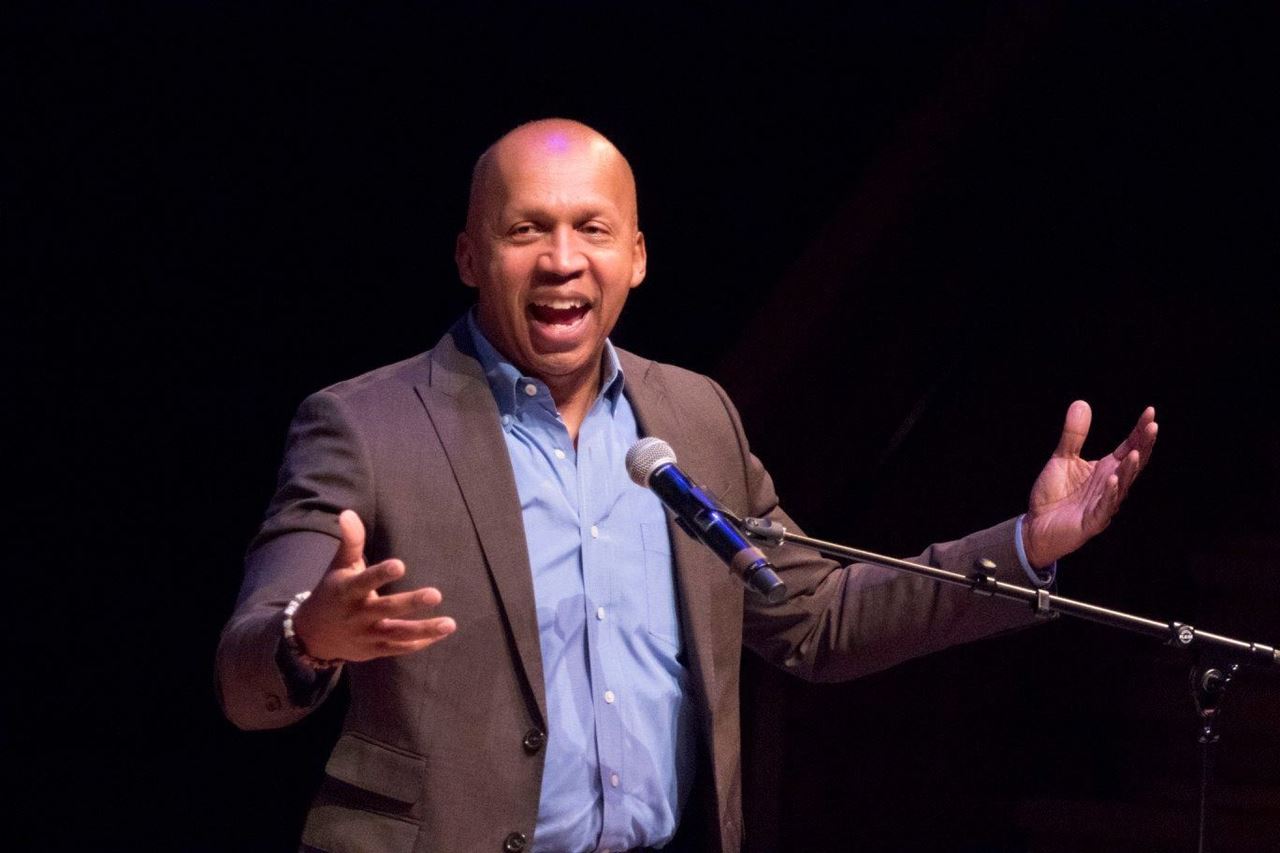 Bryan Stevenson at Soka University of America’s Critical Conversations (Feb. 2018)Mary Patrick KavanaughIt is the greatest joy to write about my hero, Attorney Bryan Stevenson. Because Mr. Stevenson is more than just an attorney and social justice activist. He is a modern-day example of the civil rights heroes that I learned about in history, and he is continuing their work to beat the drum for justice.

Bryan Stevenson is a public interest attorney who has dedicated his life to representing poor people and people of color who have received unjust treatment in the U.S. Criminal Justice System.

For 35 years, Mr. Stevenson has worked to end unjust and excessive sentencing, free innocent prisoners unfairly put on death row, combated the abuse of those mentally ill and incarcerated, and defended children who have been prosecuted as adults.

However, beyond his work as an attorney, Mr. Stevenson brings light to the legacy of racial inequality in the United States in the effort to move the nation towards criminal justice reform and truth and reconciliation around race in America. 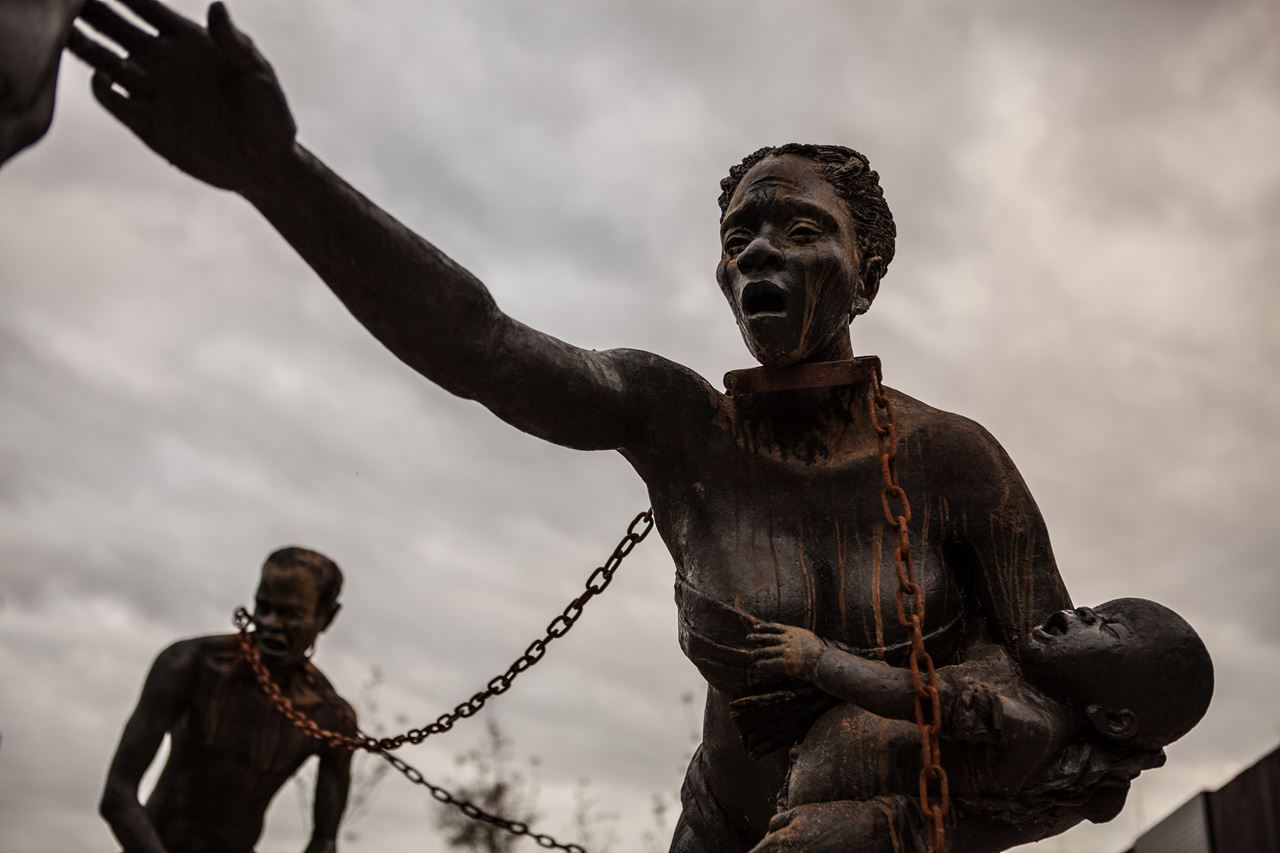 Kwame Akoto-Bamfo, Nkyinkim. Courtesy of the Equal Justice Initiative. Equal Justice Initiative / Human PicturesMr. Stevenson grew up in a poor family in the rural part of Southern Delaware. Born in 1959, Mr. Stevenson saw segregation alive and well in the laws and attitudes of people in his community, from witnessing segregated swimming pools to segregated schools and neighborhoods. However, his family modeled the importance of not accepting any form of racism and fighting for love and justice. In my interview with Mr. Stevenson, he described his Grandmother, Victoria Baylor Golden, as his hero. Her parents grew up enslaved in Virginia, and their whole family had to flee to Philadelphia to escape racial terror and violence. Still, Mr. Stevenson said his grandmother was “fierce, powerful and capable of the kind of infinite love that never leaves you” (Stevenson). In his memoir, Just Mercy, Mr. Stevenson described how his grandmother taught him the importance of getting proximate to issues in society, telling him “You can’t understand most of the important things from a distance, Bryan. You have to get close” (Stevenson, 17-18).

Mr. Stevenson also witnessed as a child how the Brown v. Board of Education legal battle overturned segregation across the nation.

It was through his exposure to heroes like his grandmother, and to legal battles like Brown v. Board of Education, that Mr. Stevenson developed an interest in promoting social justice through law. 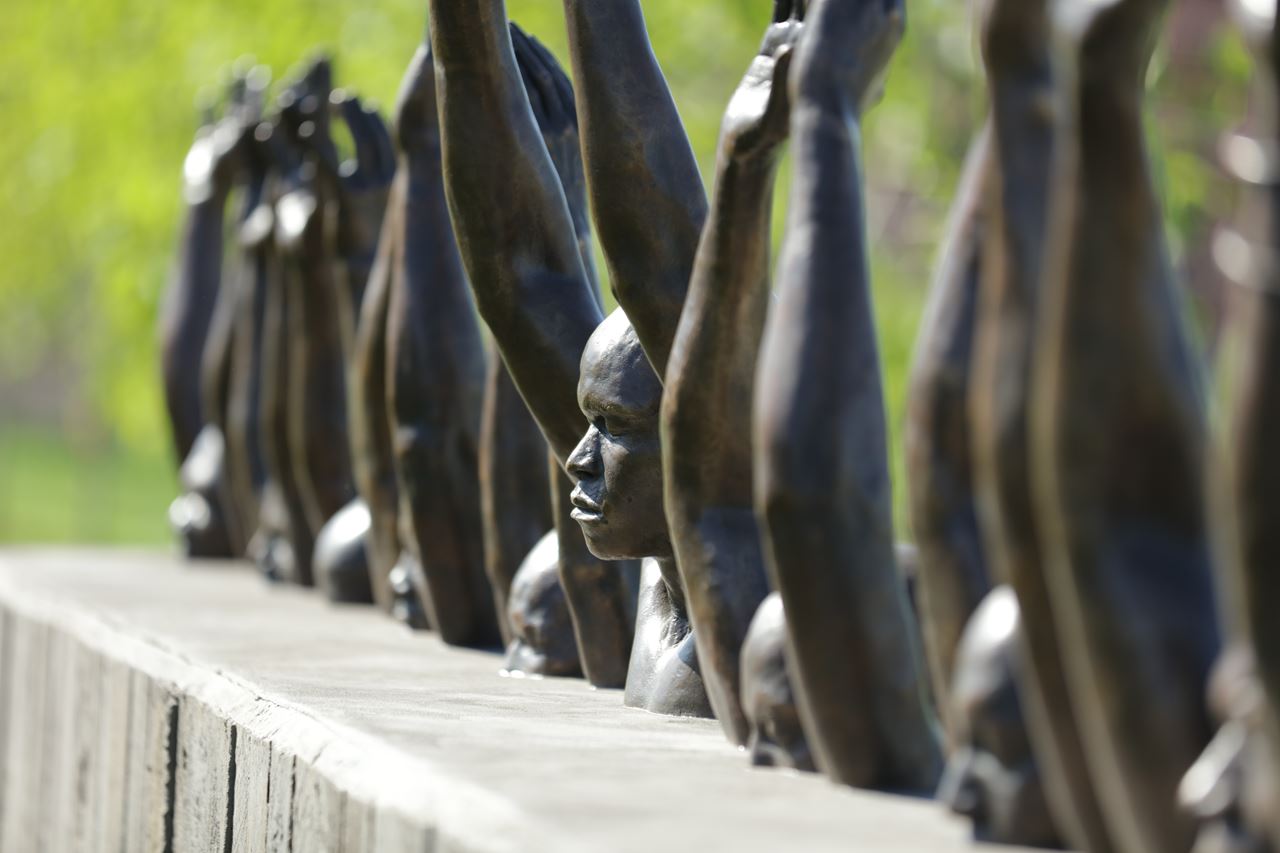 Initially, his choice of law seemed to be a disappointment because none of his courses showed any relevance to addressing poverty and racial injustices.

However, after interning with the Southern Prisoners Defense Committee during his sophomore year (1983), Mr. Stevenson moved to Atlanta and worked for the committee as a litigator for death-penalty and prisoners’ rights.

It was after working with his first client on death row that he discovered the need for criminal justice reform in the U.S. In his memoir, Mr. Stevenson recounts: 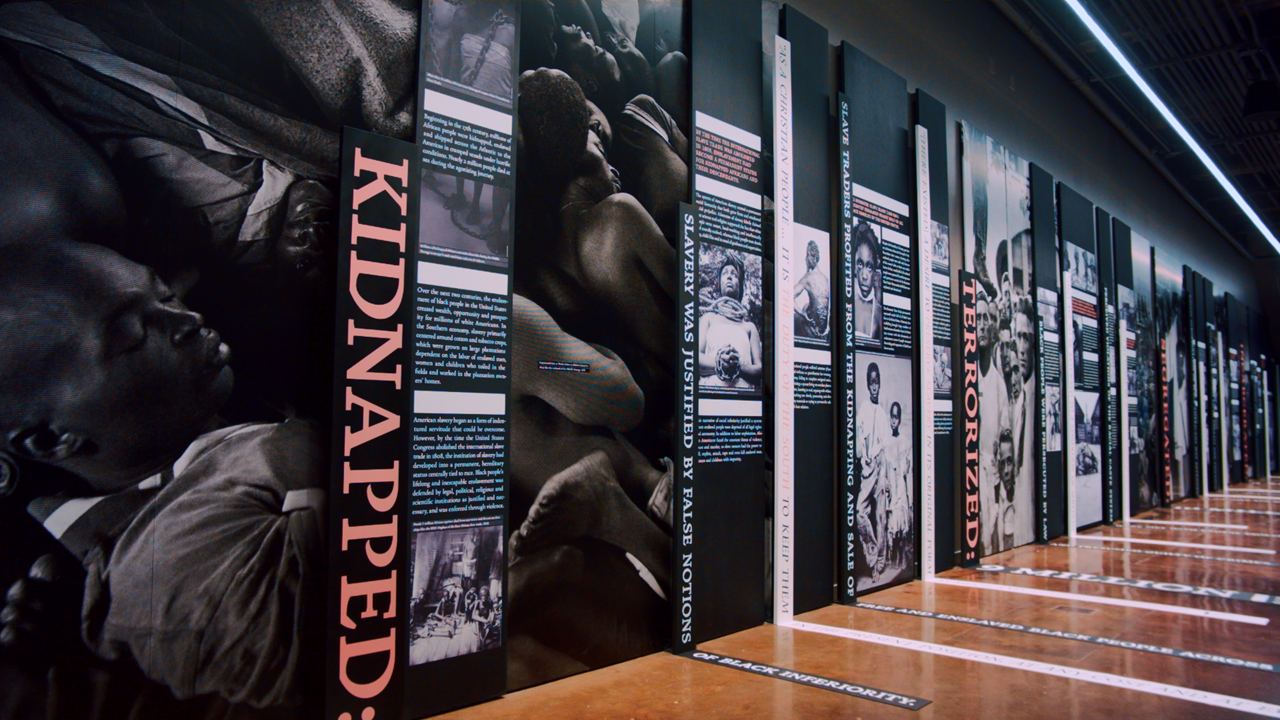 Interior view of the Legacy Museum: From Enslavement to Mass Incarceration. Courtesy of the Equal Justice Initiative. Equal Justice Initiative / Human PicturesAt the turn of the decade, Mr. Stevenson was appointed to run the Alabama chapter of the Southern Prisoners Defense Committee, in response to an increase in funding for death penalty defense organizations.

However, when that funding was slashed in 1994 by conservative politicians, Mr. Stevenson turned the Alabama chapter into the Equal Justice Initiative (EJI), a nonprofit that represents people who are victims of illegal convictions, unfair sentences and abuses in the criminal justice system.

Bryan Stevenson has been recognized across the globe for the work that he has done to address poverty and racial inequality. His memoir, Just Mercy: A Story of Justice and Redemption, is an award-winning New York Times bestseller. Mr. Stevenson was recognized in Time 100’s most influential people list in 2015, and Fortune’s World’s Greatest Leaders list in 2016 and 2017. Furthermore, Mr. Stevenson is described by South Africa’s Archbishop Desmond Tutu as “America’s Nelson Mandela.”

Since EJI’s establishment, Mr. Stevenson and the EJI staff “have won reversals, relief or release for over 125 wrongly condemned prisoners on death row” (“Bryan Stevenson”).

Furthermore, through creating initiatives ranging from creating historic markers at former lynching sites to honor the victims of lynching, to producing reports and films about the evolution of racial oppression in the U.S., EJI has worked to change “the narrative around race in America” (“About the...”). 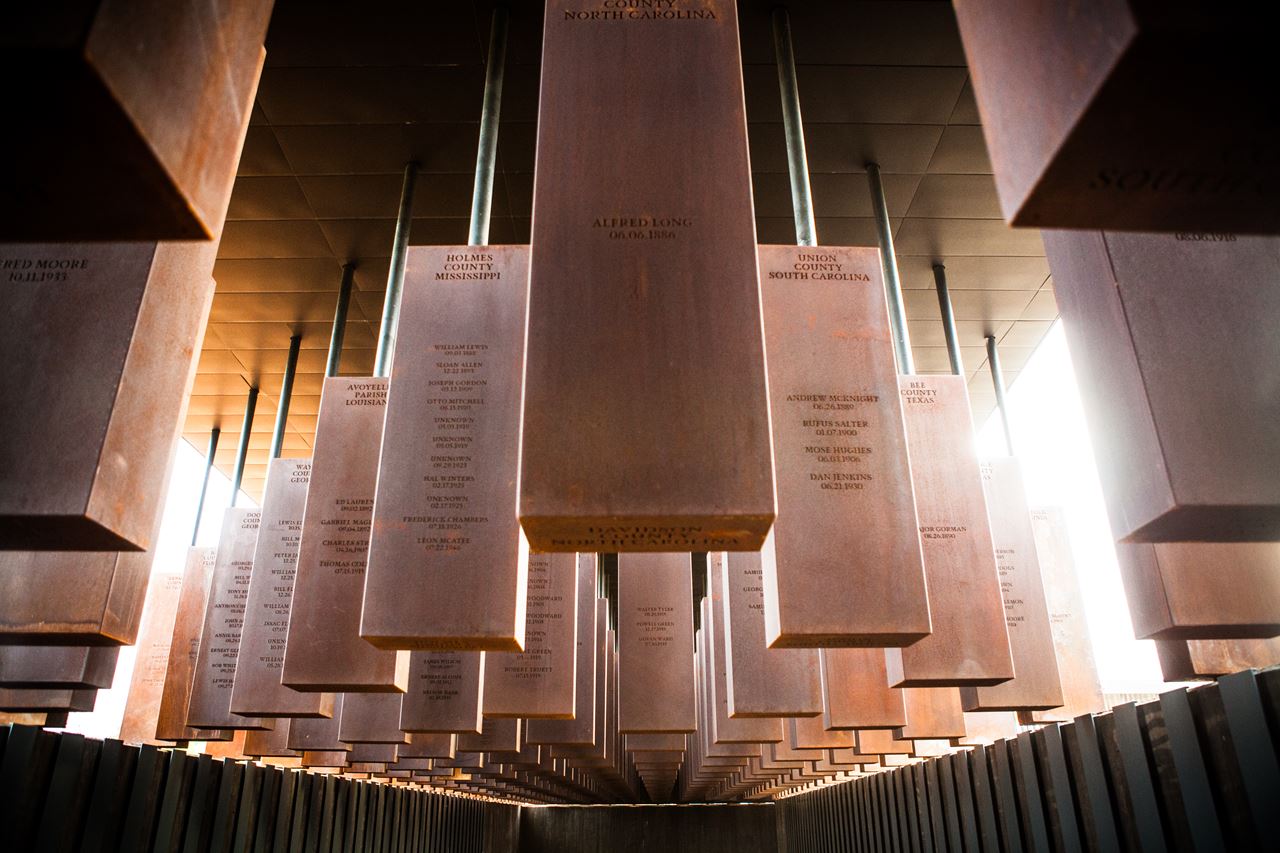 The National Memorial for Peace and Justice (NMPJ), is America’s first ever memorial dedicated to the victims of racial terror lynchings. The Legacy Museum: From Slavery to Mass Incarceration allows visitors to follow the evolution of racial inequality in the United States, and see the links between past and present issues, like police brutality.

Mr. Stevenson believes that in order for America to truly heal from its racist past, Americans need to acknowledge the injustices of the past in order to effectively move towards reconciliation in the future. According to Mr. Stevenson, “No nation can recover from injustice, oppression, abuse and atrocities without truth and reconciliation. We want there to be a place where the truth can be told” (Equal Justice Initiative, 00:00:12-00:00:22). 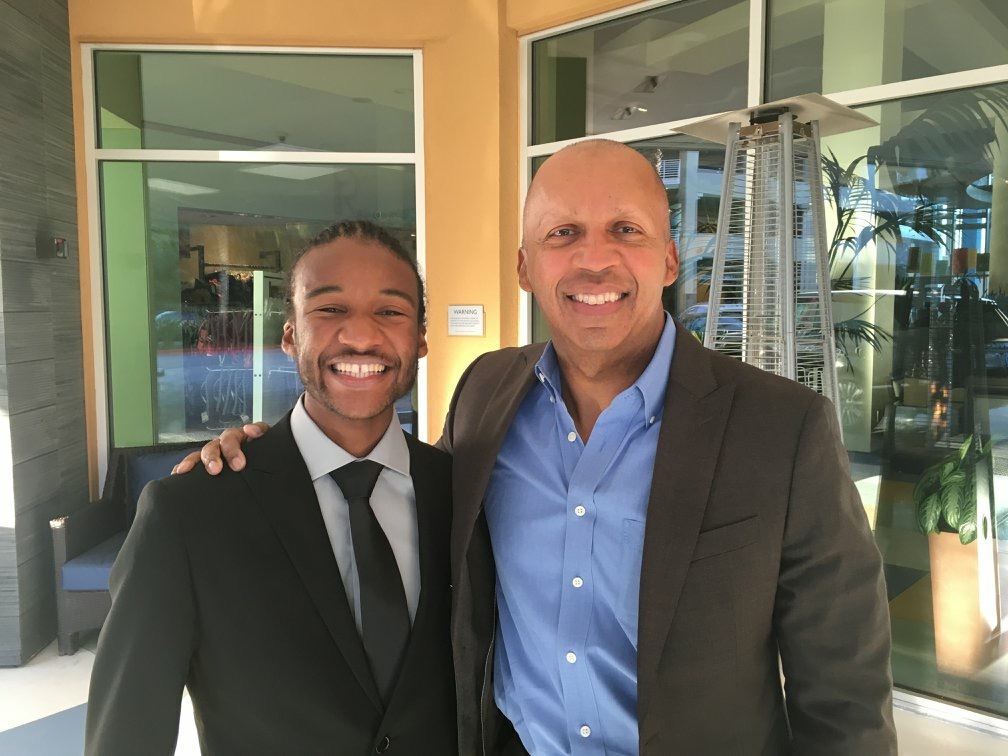 Bryan Stevenson and I (Trey Carlisle) at Soka University of America’s Critical Conversations (Feb. 2018) Mary Patrick KavanaughBryan Stevenson has been a inspiration across the globe, and a hero to poor people and people of color across the nation. Mr. Stevenson has courage to not fear or deny men, women, and children who have been dehumanized as criminals. Rather, through listening to their stories, passions, dreams, regrets, and hopes of those incarcerated and on death row, he sees the humanity within them. Mr. Stevenson never ceases to take the calls and hear the cries of individuals, and the families of individuals, who are even weeks from being condemned to death. Instead, he stands by their side, from their first phone call to the courtroom, fighting for those incarcerated to receive a second chance, and for those falsely accused to receive justice and freedom! Furthermore, Mr. Stevenson brings light to the legacy of racial and economic inequality in the country so that we as Americans do not continue the injustices of the past, but truly move towards reconciliation!

About the Equal Justice Initiative - The Equal Justice Initiative is committed to ending mass incarceration and excessive punishment in the United States, to challenging racial and economic injustice, and to protecting basic human rights for the most vulnerable people in American society.
Bryan Stevenson - BRYAN STEVENSON is the founder and Executive Director of the Equal Justice Initiative in Montgomery, Alabama. Mr. Stevenson is a widely acclaimed public interest lawyer who has dedicated his career to helping the poor, the incarcerated and the condemned.
Bryan Stevenson and the Legacy of Lynching - In Alabama, Bryan Stevenson is saving inmates from execution and memorializing the darkest episodes of America’s past.
Remembering History: EJI’s Legacy Museum & National Memorial for Peace and Justice - To learn more about Bryan Stevenson, EJI, and their two new museums, check out this film about my experience at EJI’s NMPJ and Legacy Museum opening.

To learn more about Bryan Stevenson, EJI, and their two new museums, check out the film below about my experience at EJI’s NMPJ and Legacy Museum opening:

Just Mercy: A Story of Justice and Redemption