by Susannah Abbey - MY HERO Staff

Sharon Christa McAuliffe was the first teacher to fly in space. She was selected from more than 11,000 applicants from the education profession for entrance into the astronaut ranks.

McAuliffe was born September 2, 1948, the oldest child of Edward and Grace Corrigan. Her father was, at that time, completing his sophomore year at Boston College. Not long thereafter, he took a job as an assistant comptroller in a Boston department store, and the family moved to the Boston suburb of Framingham. As a young girl, Christa was very excited about the Apollo moon landing program and, years later, wrote on her astronaut application form that "I watched the Space Age being born and I would like to participate."

McAuliffe attended Framingham State College in her hometown, graduating in 1970. A few weeks later she married her longtime boyfriend, Steven McAuliffe and they moved to the Washington, DC, metropolitan area so Steven could attend Georgetown Law School. She took a job teaching in the secondary schools, specializing in American history and social studies. They stayed in the Washington area for the next eight years while she taught and completed an M.A. from Bowie State University in Maryland. They moved to Concord, New Hampshire, in 1978 when Steven accepted a job as an assistant to the State Attorney General. Christa took a teaching post at Concord High School in 1982 and, in 1984, learned about NASA's efforts to locate an educator to fly on the Shuttle. The intent was to find a gifted teacher who could communicate with students from space.

NASA selected McAuliffe for this position in the summer of 1984. In the fall she took a year-long leave of absence from teaching, during which time NASA would pay her salary, and trained for an early 1986 Shuttle mission. McAuliffe had stated that her goal as the first teacher in space was to "humanize the Space Age by giving a perspective from a non-Astronaut." She had an immediate rapport with the media, and the teacher in space program received tremendous popular attention as a result. It is in part because of the excitement over McAuliffe's presence on the Challenger that the fatal accident had such a significant impact on the nation. Though she never got to report from space, Christa McAuliffe did a lot to excite a new generation of children to dream about being a part of our future space program.

Today, there are elementary schools named after her in many states, including Florida, Colorado and California.

Christa McAuliffe encompassed all of the values and ideals that I hope to someday possess and bring into my classroom. As an education major, I hope to touch the lives of my students the way Christa touched the lives of hers. I have always had a fascination with space and space travel, but my first love is teaching. Because of Christa's example, I now know that I can accomplish both of these dreams. My goal is to become the first teacher on a permanent space colony in outer space. I know this sounds far fetched, but my hero, Christa McAuliffe, taught me to dare to dream. She also taught me that one of the greatest professions in the world is teaching. I live by her words, "I touch the future...I teach." I only hope that I can live up to them.

I Touch the Future: The Story of Christa McAuliffe
Robert Hohler 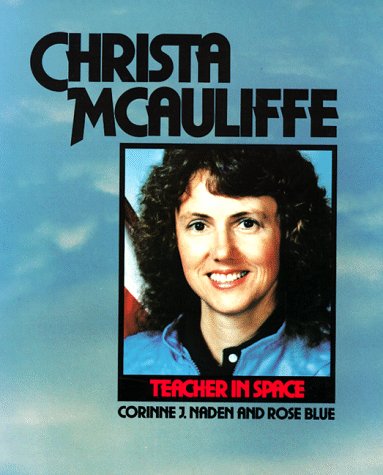