by Kathy Crockett
My Hero

For more than thirty years, activist, advocate, and author Frances Moore Lappe has courageously fought to raise awareness of the ways in which hunger is caused and of the ways in which we can end it. She possesses the kind of optimism and courage it takes to go beyond just pointing out the problem and has been making huge strides to be a part of the solution. Ironically, many of the nations that grow the food that we eat can't feed their own people. Lappe is a unwavering champion for their cause, striving to solve the problems of hunger and empower all people with the resources and options to relieve these nations' suffering.

My Hero suggested viewing | MY HERO Recommends Frances Moore Lappe's Thought Sparks Video Series in which she opens her heart. We hope you'll be energized by her often-surprising takes on hope, democracy, and courage.

In the late 1960s Frankie, as Frances Moore Lappe is known by most, was studying food supply at the Berkley college library when she had an epiphany. Spread before her were grain charts, United Nations agricultural tables, a slide rule, and pages of scribblings and equations. All of her calculations led her to one conclusion: that it was possible to feed and nourish every person in the world. Her discovery that year has shaped her life, and has helped to open the eyes of the world on the issues of protecting the planet and feeding ourselves in a healthful, respectful and inclusive manner for all. When Lappe first began sharing her ideas, they were unique and not many people shared her perspective; vegetarianism, the organic movement, nor the health food industry were as strong then as they are today. Even though she knew that she would face criticism and skepticism, Frankie also knew that her ideas could help resolve suffering for millions around the planet; and no amount of intimidation or ridicule would be worth keeping quiet.

Frances Moore Lappe didn't know that her words would be the ones to open up a movement, but for her, speaking out was worth a try. She believed and continues to believe that anybody can make change; that there is a great deal value in taking action. Nobody knows which person, which voice, which pair of hands, will be the one to push through change, but if every hand does its part to give a little shove, then we will all see the benefits come about. Lappe sees this mutual responsibility within all citizens as a way to end needless suffering from hunger. "Hunger is not caused by a scarcity of food, but by a scarcity of democracy," she argued.

Intent on finding the best way to get the word out and beginning to solve the problem, Lappe wrote a book, entitled Diet for a Small Planet. The book, however, had a slow start gaining popularity, as vegetarianism (and other conscious practices on nutrition, farming, and the environment) was still a radical movement at the time, but she wasn't deterred. Indeed, the book did catch on; since its publication in 1971, Diet for a Small Planet has sold more than three million copies. It launched her on a life journey to create healthier and more efficient ways to nourish people in every pocket of the globe.

Frances feels that the problem of hunger will not be solved from the top down, with governments shipping food to those countries in need. It has to start from the ground, giving people a base to create their own ways of nourishing themselves. With Joseph Collins, she founded Food First in 1975. Still going strong thirty years later, Food First researches the causes of hunger and organizes work to help give the poor a voice, access to land, and the knowledge of ecology and environmentally friendly farming.

When she saw that there was more work to be done to help people see how democracy--conversations and lobbying among ordinary citizens, not just government officials--could end hunger and environmental destruction, Lappe left Food First. Collaborating with her daughter Anna, she co-wrote the companion book to Diet for a Small Planet. The book, Hope's Edge, follows visionaries around the world, chronicling their efforts and successes to bring about a healthier planet. Along with her collaboration on the book, Frances Moore Lappe also founded a second organization with Anna to create communities that work for all. The Small Planet Institute's cast of volunteers helps villages find their own values and maintain real democratic forums to enable positive change.

All of Frankie's words, work, and activities show that she is not afraid to tell the truth. It is really quite astounding to see how much good can come out of standing up for your values and beliefsï¿½and many others have seen this good come from Lappe. In fact, Artist Robert Shetterly included her in his 2003 portrait exhibition, entitled "Americans Who Tell the Truth." She has also been awarded with many honorary degrees and received numerous honors and distinguishments for her work throughout the global community, among them the Rachel Carson Award (2003) and the Right Livelihood Award (1987), an international award that is often known as the alternative Nobel Prize, for "her vision and work healing our planet and uplifting humanity."

For Frances Moore Lappe, food is a bond that we all share, and the key to a healthier world is to ensure that everyone has access to it. Those with a surplus of food need not simply hand out food; but instead they need to teach people suffering from hunger how they can feed their communities and help them establish confidence in their ability to provide for themselves. Even as everyday citizens we have the power to take on hunger by paying attention to the choices we make in the grocery store and at the dinner table. The decision to choose fruit and vegetables grown without pesticides trickles down to improve the health of the farmers who produce what you end up eating. When you put the organically-grown banana in your breakfast cereal, you are helping to eliminate the farmers' exposure to pesticides that cause deadly illnesses. While many Americans have the power to opt for the double cheeseburger over the organic spinach salad or vice versa, we also have the power to change our eating for the good of our own health and the health of the planet and to help others do the same. 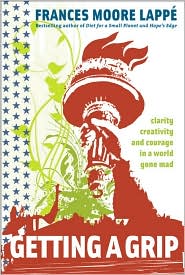 Getting a Grip: Clarity, Creativity and Courage in a World Gone Mad
Frances Moore Lappe 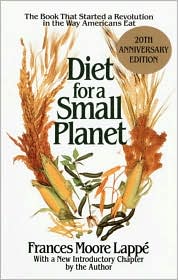 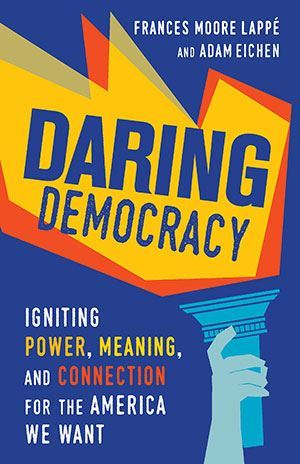