Help for Ukrainian refugees, from Russians

People hear my accent immediately,” says Anastasia Chukovskaya. “There’s a pause when they hear I was born in Moscow.” 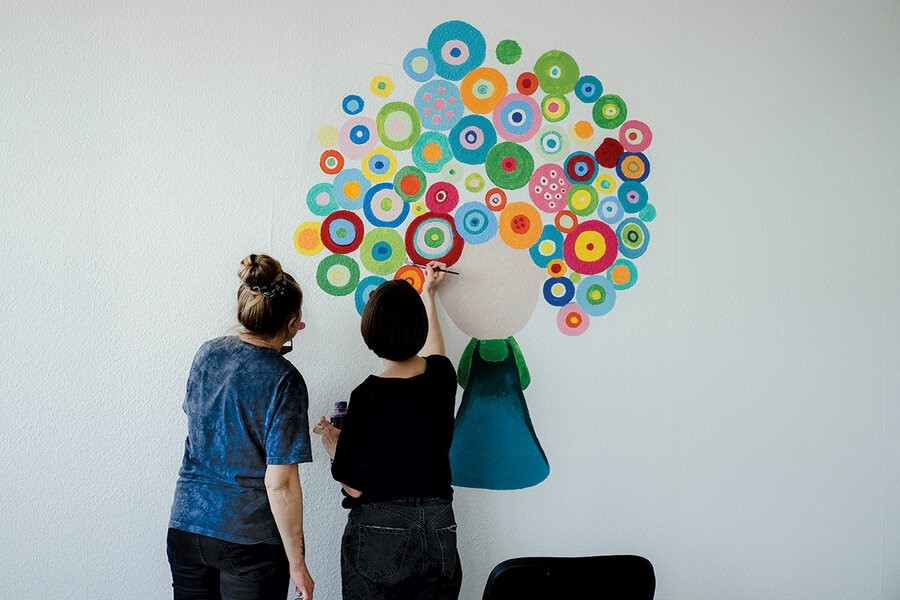 Antonina, an artist and refugee from Irpin, Ukraine; and Daria, an artist from Moscow, decorate the new Learning Without Borders Center, which opened in Budapest, Hungary, on April 19.Courtesy of Anastasia Chukovskaya

Anastasia Chukovskaya was in Moscow when her husband, Alexey Zelenskiy, called from their home of nine years in Budapest, Hungary. Russia had invaded Ukraine. She rushed back, and for several days, the couple, both Russians, were “devastated.” They didn’t know what to do.

Then their phone started ringing.

“Someone was passing along our number,” says Ms. Chukovskaya, speculating that their past work in the media meant many people had their contacts – and shared them with refugees. “We understood that this was it.”

Helping hands kept appearing. A newly arrived Kyiv resident announced she was a teacher and demanded to know where the children were. “She is in the most stressful phase of her life, and she is thinking about using her skills immediately,” Ms. Chukovskaya marvels.

On April 19 this expanding network opened the Learning Without Borders Center for refugee children. The nongovernmental organization Migration Aid is paying the lease; donations offer support as well.

Ms. Chukovskaya’s nationality has prompted curiosity. “People hear my accent immediately,” she says. “There’s a pause when they hear I was born in Moscow.”

While helping prepare the space, one Ukrainian artist, painting flowers on a wall, told Ms. Chukovskaya she could not imagine how she felt as a Russian. Feeling that compassion reflected back moved Ms. Chukovskaya. “A refugee woman would support me? I couldn’t speak.” Another told her that “meeting you reminds me I shouldn’t go into blind hatred.”

These encounters have been a blessing for her and her husband.

“My Russian friends still in Russia envy us because every day we can do something to help,” Ms. Chukovskaya says. “So we are the lucky ones” – even as, she says, her “amazing life” as an educator, media trainer, and editor who believed her work could help transform Russia felt shattered.

The couple, who have two children, have also been sobered by seeing a modern replay of what their grandparents’ generation experienced. But they also see hope.

“When I was reading diaries of the 20th century, there was always this unknown person,” Ms. Chukovskaya says. “Suddenly, you find this piece of bread – someone put it there. You find support from someone who gives you warm clothes. These unknown people helping you in time of need, this is what happens.

Now, I hope I am that person.”