We want to uncover stories that come from real people, giving people a voice, and creating a visual interpretation of modern history. 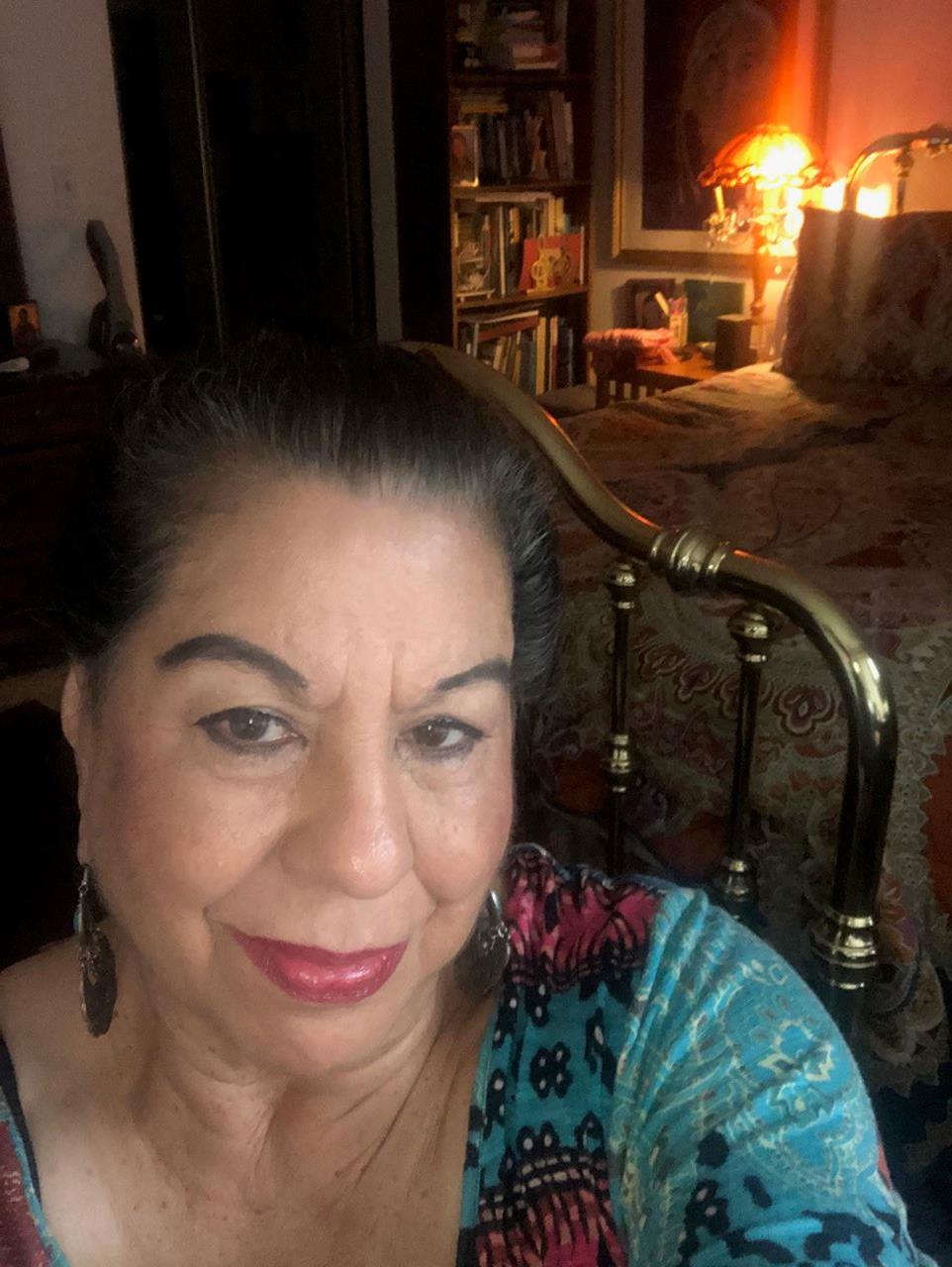 Joanne Tawfilis is the executive director of The Art Miles Mural Project, which she co-founded with her late husband, Fouad Tawfilis. She's a world-renowned "artivist" and inspirational speaker, with an honorary PhD in Fine Arts from California State University San Marcos. As an artivist, she doesn't just create and cherish art; she also uses it as a medium to bring people together through the common goal of peace and human rights. The Art Miles Mural Project has mobilized more than 500,000 people from over 125 countries to paint approximately 5,000 murals. When the project reached 4,000 murals, they were displayed at the "Culture Wheel" in Cairo, Egypt, and live streamed to 200 million people globally. The United States presented Art Miles as an exhibition in Paris, France, at the UNESCO headquarters. People of all ages and cultures, from all over the world, create the art, which is either painted or sewn onto canvas.

Joanne and her late husband, Fouad, have led The Art Miles Mural project for an impressive twenty-two years. It stemmed from a project she started in Bosnia, where 350 orphans without family created a mural using a bedsheet riddled with bullet holes. The children took part in a project that helped heal the horrors they had experienced. With the murals, they built something beautiful out of heartbreak, something tangible out of chaos.

In 2008, MY HERO partnered with Art Miles by inviting students, teachers, and community members to create their own 12' x 5' mural of their hero and upload it to the MY HERO website. These murals were displayed in the MY HERO Gallery as an online art installation. The Art Miles Mural Project also had a physical museum in Oceanside, California—the Muramid Mural Museum—which was the first mural museum in the world. Rising rents necessitated a location change. The murals are being photographed to be displayed in a new cultural center, both inside and outdoors. Tawfilis plans to change the theme every two months to highlight different countries and cultures: "My whole objective remains to bring people together through the arts. Based on the latest series of dissent in our country, it’s time people learned about other cultures and how much more we have in common than in differences.”

One of Art Miles' teams that grew into its own amazing project is the International and Intercultural Mural Exchange in Japan. Mr. and Mrs. Shiwaku facilitate a project in which one mural is created between two schools in different countries. The mural was scheduled to be debuted at the 2020 Olympics, which has been postponed due to the pandemic, but the mural will still be displayed at the Olympics next year. Tawfilis also stated that among the twelve themed miles of murals is a "Fairy Tale Mile," facilitated by Guiseppe Fortunati in Narni, Italy.  Murals have been exhibited in scores of major museums and locations throughout the world, including Egypt, Austria and the UNESCO headquarters in Paris, France.

Tawfilis recently designed a new project, called “Art Miles Muramid On the Go.” A 15” x 30” canvas is rolled up or folded and put into a box, along with five bottles of paint in basic colors, brushes and palettes, and directions. Tawfilis says, “the beauty of this project is with the pandemic, it can be done individually, or, where there are some schools in session, they can also work on it as a group.” She is currently using MY HERO as a focus for twenty-five students to create art at Laurel Elementary School in Oceanside. She is asking students to interview family members and create mini murals based on family heroes. The students can also create a dance or a piece of music for the Music Mile, or they can create a story or video and submit it to MY HERO. Laurel Elementary is 95% Mexican American, and 95% below the poverty line; she wants the students to know their history—often ones that don't get told. Tawfilis says:

“I heard one story already about a parent who walked from Mexico, near Oaxaca, to Palm Springs, and then from Palm Springs he got hired to go to Fresno; he met Cesar Chavez and became a farm worker, and he and his family became activists with Cesar Chavez and marched. I talked to one lady whose daughter was trafficked. She was a teenager and then she told me her story, so her daughter painted a mural that inspired me actually to do a series of women’s paintings and will exhibit in New York City in the future.” 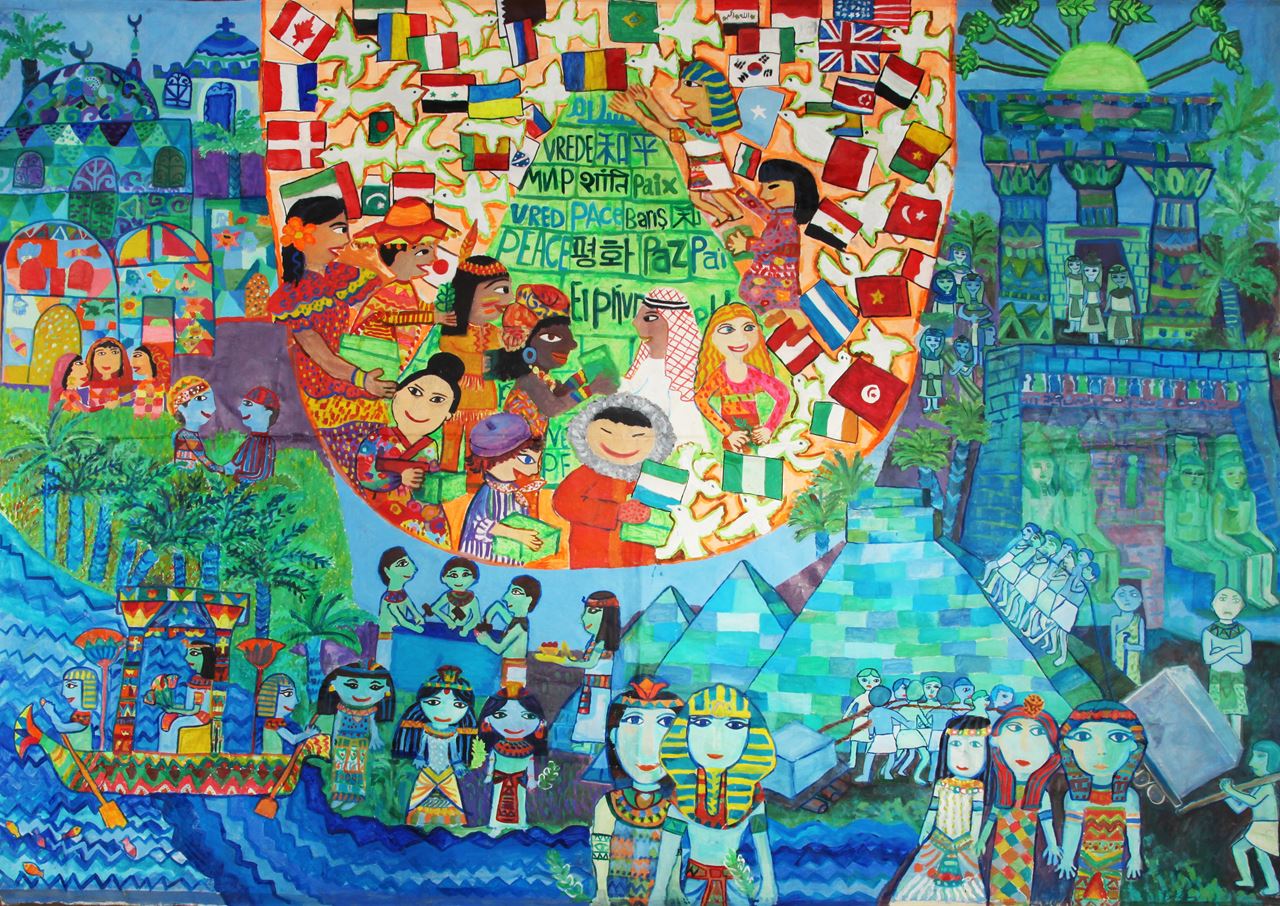 Tawfilis hopes to schedule another twenty five students at Cal State University, San Marcos, who will be participating in Art Miles Muramid On the Go with CSUSM Community Engagement Tukwut Leadership Circle (TLC). This spring (2021) the students will hopefully partner with Mountain Shadows Outreach—a day center for developmentally disabled adults. Tawfilis has dedicated ten years working with the center, in what is called the MPOWR (Mountain Shadows Painting Our World Radiantly) Program. The program matches college students with clients at Mountain Shadows, some of whom are mildly special needs and others more severely in need of care and support. She says, “It’s been a blast . . . The reviews we’ve gotten back by students and some of the families of the ‘enabled’ has been amazing.”

Tawfilis is making Art Miles Muramid On the Go affordable, so even parent-teacher organizations can purchase them. She’s also allowing the participants to keep the murals after sending her a high resolution photo.

In addition to her ongoing leadership with Art Miles, Joanne has served in numerous high-profile positions. She was an executive of the United Nations Environment Program (UNEP) and the  International Atomic Energy Agency (IAEA), was director of the Women of Srebrenica Project in the former Yugoslavia, and is currently a US National Commissioner for UNESCO. Regarding UNESCO, she says, "Even though our current President has withdrawn our membership, my colleagues and I still work on projects such as world cultural heritage, and promoting whatever we can, education, science, technology, which are all critical elements of education throughout the globe. We just maintain a low profile and continue the work.”

Joanne Tawfilis is a true hero who continues to work for a more connected and loving world. She says, “I think there’s not enough time to write new textbooks and get them into the system and that’s why our mini murals from Muramid on the Go and stories of heroes will help get more complete stories of history from our country as well as others. We want to uncover stories that come from real people, giving people a voice, and creating a visual interpretation of modern history.” Tawfilis has created an innovative space for these truths to shine on canvases near and far.