Alusine Dumbuya from Sierra Leone Africa writes: I am attending the Prince of Wales (POW) Secondary School in Freetown, Sierra Leone. I am a member of the International Education and Resource Network (iEARN) club in my school. My hero is Mr. Kofi Annan, the present Secretary General of the United Nations. I chose Mr. Annan because whenever there was war in any country, especially in Africa, he would send his troops there on a peacekeeping mission to calm down the situation. For example, when there was a brutal war in Sierra Leone, which lasted for almost 10 years, he was the one who sent his troops to save us. So I congratulate him for saving our lives. Forevermore, he is my hero.

by Jerrilyn Jacobs from Los Angeles, California in United States

"We are all part of the same human family – and when one part of that family does well, we all do better." 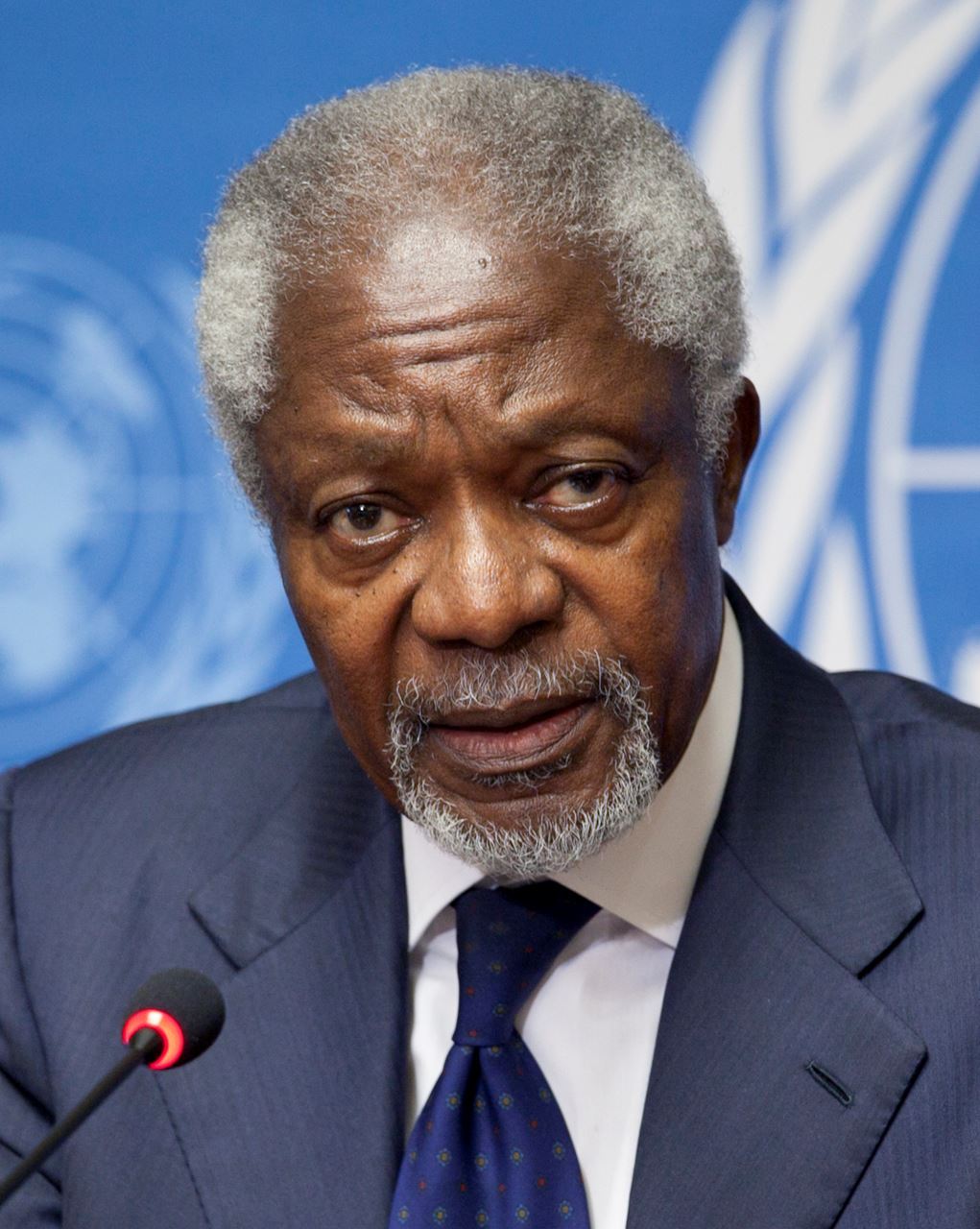 Kofi AnnanUS Mission in Geneva [Public domain], via Wikimedia CommonsKofi Annan recalls the beginning of his first winter at graduate school in Minnesota. He had decided the earmuffs everyone else was sporting looked silly and vowed he would never wear them. By the end of that winter (his ears nearly froze, he confessed) he had had a change of heart.

"Never walk into an environment and assume that you understand it better than the people who live there," is the moral he has extracted from the Minnesota experience, and which he puts to use every day as the leader of the United Nations.

Annan was born April 8, 1938 in Kumas, Ghana, and his life, as his work, is all about internationalism. He speaks English, French and several African languages, and is married to Nane Lagergren, a Swedish artist and lawyer. He has spent thirty years working for the United Nations, an organization whose mission is to promote peace among all the countries of the world, holding administrative posts in Ethiopia, Egypt, Switzerland and the U.S..

"People trust him because he is honest," says Mohammed Sacirbey, Bosnia’s UN ambassador and The BBC News' Rob Watson says that Annan is "a genuinely affectionate and well-meaning man.... What his staff and journalists find most striking about (him) is his sense of calm."

When he became Secretary General, the UN was in trouble financially, and was losing its influence in the world. Annan reformed the organization, made necessary budget and staff cuts, and brought new life to the UN. Under his leadership, the UN dealt with several delicate political situations, working to raise the status of women and improve relations between business, labor and civil groups. As Secretary-General Annan wanted all of the world's people to share the benefits of globalization, and remains committed to "ending poverty and inequality, improving education, reducing HIV/AIDS, safeguarding the environment and protecting people from deadly conflict and violence." He maintained his own Web page to keep people informed during his 10 years in office.

Annan's management style has been the subject of admiration among his colleagues. Watson says: "He prefers to build a consensus however long that takes. One of his advisors says Mr. Annan runs the UN like an old-fashioned African village, with long discussions among the elders, periods of reflection and, eventually, a decision."

On September 14, 2001, Annan rang the Peace Bell to mark the International Day of Peace. The ceremony occurred three days later than usual. "We have lost family, friends, and colleagues," said the Secretary-General. But let us not lose hope. We must maintain our resolve, and all nations must unite against the forces of darkness and depravity. It is at moments such as this, more than ever, that we need to re-dedicate ourselves to the cause of peace."

When Kofi Annan heard he was sharing the 2001 Nobel Peace Prize with the United Nations, he said, "All of us who work for the United Nations should be proud today--but also be humbled, humbled because even more will be expected of us in the future."

To young people who want to know what they can do for the world, Annan offers this advice:

"Always start by learning and looking around you. Get to know people whose lives are different from yours. Find out what you have in common with them. Build bridges of understanding with them. It is only by doing so that we can truly appreciate the worth of others. We do so whether we are sharing our lunch with someone sitting next to us, or exchanging email greetings with someone at the other end of the world.

"Computers and modems help us talk and listen to each other across oceans. But that would not do us much good if we did not already have a lot in common. Every society needs shared values: for our global society, that is respect for our equal human rights. We may have different religions, different languages, different coloured skins – but we all belong to one human race. We are all part of the same human family – and when one part of that family does well, we all do better. So we want to help others to have the same opportunities we have.

"Once you have created a bridge with others, keep it open by talking to each other and, above all, by listening. This is what I try to do in my job as Secretary-General, because I know that once I have built up trust with someone, we can work to change things together. So can you. When you see something that is wrong, no matter how big the problem is, ask yourself: Who else would like to change this? How can we work together? Take action with others who share your conviction. Have the courage to believe you can make a difference. As with everything in life, small steps count. If something has not been done before, it does not mean it can’t be done; it only means you could be the first to do it."

From remarks made at the Festival Mondial des Enfants in Basel, Switzerland, June 24, 2000, quoted from the UN CyberSchoolBus Web site.

In November 2001, Annan met members of Seeds of Peace, an international youth organization working for greater understanding and friendship among Middle Eastern, Mediterranean, and Balkan nations at war. The young people, spent five days at a conference discussing the roots of terrorism, then attended a UN General Assembly where they presented Annan with a charter detailing the ways to prevent terrorism. Annan is always appreciative of the ideas of young people.

Visit the United Nations page on PBS' website to learn about the UN, Kofi Annan, and more. 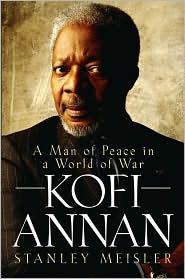