by Babak from Fredericksburg

Nelson Mandela once whispered to him, “Thanks for intervening in matters that don't concern you."

To be honest. To be moral. To be, in essence, as close to what we consider perfect without crossing the line into irritating: that is what most people call the definition of a hero. Throughout time, heroes have been a society’s ideal person, someone who everyone could look up to with respect and say, “Look there, there are our heroes, and here is what they did for us." However, few remember what their hero probably looked like when they first stepped into the limelight: someone too good, too different from the norm, saying things that they should not say, acting more as a villain does than a hero does. Only as time passed do people begin to recognize just what a hero the villain was.

Bernard Kouchner is one of these people. Born on November 1, 1939 in Avignon, France, he has grown to be one of France’s most beloved, and not so beloved, humanitarians.

As a gastroenterologist in Paris, Kouchener wrote nine books, and revolutionized humanitarianism throughout the world. In 1968, he ran to Biafra near Nigeria to assist a country in famine, saying, “I ran to Biafra because I was too young for Guernica, Auschwitz, Oradour and Setif"(Time Magazine). In 1970, he co-founded Medecins sans Frontières (Doctors without Borders), which was awarded the 1999 Nobel Peace Prize, and then Medecins du Monde (Doctors of the World) the next decade. During the remaining 1980s, he organized several operations, including "A boat for Vietnam", in which the hospital ship "l'Ile de Lumière" was sent to Bidong Island in Malaysia and the Anambas Islands in Indonesia to assist the boat people; a boat for Lebanon, a plane for the refugees from El Salvador; and the International Committee against piracy. Perhaps most famous of the operations he led in this time period was Operation Restore Hope in Somalia, where he even assisted in carrying bags of rice to the people, supposedly the same bag without emptying it three times, turning a charity event into a media event as well, which was bad politics to his critics.

He also ran through the political arena as well, as a member of the Socialist Party. He was the Minister of State under various other officials from 1988 to 1991, becoming the Minister of Health the following year. From there, he continued, becoming a member of the European Parliament and President of the Committee on Development and Cooperation in 1994 (and still is), founded the social charity "Réunir, le dialogue en action" (Make fun, dialogue in action) in 1995 and became the Deputy Chairman of Radical that December (and still is).

Finally, in July of 1999, he became the Special Representative of the Secretary General of the United Nations and Head of the UN Mission in Kosovo. His actions there were very different from the normal; in fact, Kouchner chose expediency over bureaucratic niceties and occasionally ruffled feathers. In one colorful moment, Kouchner savaged a visiting UN human rights envoy by telling him to "shut up." The envoy called the province a haven for organized crime in his description upon returning. Kouchner dismissed the description as unfair and shameful, and continued into January 2001. The following month, he became the Minister Delegate at the Ministry for Employment and Solidarity with responsibility for Health in France, which he held for the next year.

Most recently, Kouchner has stepped up to the platform on his opinions of the Iraq War. When most of his fellow Frenchmen were against the idea of entering, he supported it. "Saddam Hussein was perhaps the most bloodthirsty dictator after Hitler and Stalin," Kouchner said. "We can defend the oil of Kuwait, but not the people of Iraq" (International Herald Tribune). However, in a press conference of last year, he continued to say that now the focus should be on the actual people themselves, and that they are the only ones that can say yes or no to war. At the meeting, two Iraqi expatriates were there. One thanked him, saying that what he said was true. The other said his, “no to Saddam, no to war” was no stance at all, and that he could not have it both ways.

It is not just at meetings where he receives negative opinions. In general, other politicians seem to see him as a media manipulating, controversial-idea spewing man. Indeed, they point out he is even married to a French media superstar named Christine Okrent. To Kouchner, it is all jealousy: "Jealousy prompts criticism of my success with the media. Others simply do not successfully put across their ideas” (International Herald Tribune). While his critics hate him, Kouchner is quick to point out his high popularity in the polls. “People approve when I say politics is not about lying. People realize that you cannot lower taxes and spend more" (International Herald Tribune). It is true; around the world, people hail Kouchner as the inventor of Humanitarian Intervention. As to his future, he refuses to give the slightest hint, and claims he has no game plan.

Kouchner was never a humble man; in fact, it is easy to accuse him of being ambitious. When others would not have gone to places, he did, and spoke whatever he wanted about it. He forgot the pleasantries, forgot pleasing everyone, and stuck to his morals, to the point where his own party fights with him. He is in almost no sense a perfect man. However, despite all this, he has saved countless lives, become a very popular (if radical) figure in France, gotten married and had four children, and created what has now become common sense: the fact that when people are in trouble, it is our duty to help them out no matter what. "My political stand is to put forward the national interest of all," Kouchner once said. "I do not have career anxiety.” Nelson Mandela once whispered to him, “Thanks for intervening in matters that don't concern you." And in the words of Time magazine, “This humanitarian breaks taboos and reveals matters that render us sleepless. Faced with globalized inhumanity burning the 21st century, he is introducing a new humanism without geographical or political borders. He does it not to open the gates of paradise, but to bolt the gates of hell.” And that... is what makes him a hero. 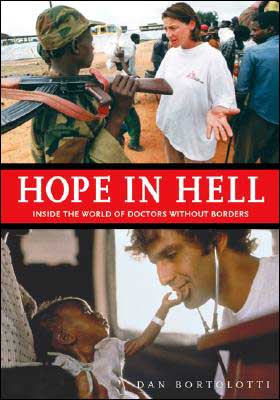 Hope in Hell: The Inside Story of Doctors Without Borders
Dan Bortolotti