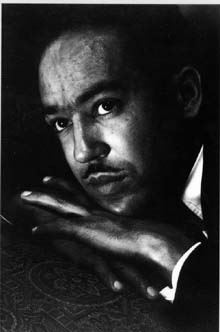 Langston HughesPhoto by Constance Kanaga. Courtesy of Schulte Roth & Zabel on behalf of the Estate of Wallace Putnam.Until the first part of the 20th century, the world of poetry was dominated by Caucasian artists. White poetry written about the experiences of white people was the only kind of verse most folks had ever heard.

With the advent of the Harlem Renaissance in the 1920s, this relatively genteel world of American poetry was shaken to its foundations. Strong black voices, writing with African-American rhythms and cadences, broke out all over the country. Of this remarkable creative outpouring, one voice rose among all of the rest. This was the voice of poet Langston Hughes.

Langston Hughes was born in Joplin, Missouri, in 1902 to a family of abolitionists. His grandfather was Charles Henry Langston, the brother of John Mercer Langston, who was the the first black American to be elected to public office in 1855. After high school, Hughes went on to Columbia University to study engineering, but soon dropped out to pursue his first love — poetry. He never looked back.

The poetry Hughes crafted over the course of his lifetime was filled with rhythm and beat. His stanzas weave wildly smooth tunes about life as a black American. Indeed, Hughes always acknowledged that his primary poetic influences were the blues bars of Harlem and D.C. He once remarked, "Blues had the pulse beat of the people who keep on going." Listen to the rhythm of this short piece.

Hughes did not confine himself to revealing just the cadences of black music to his readers. Rather, he wanted his audience to taste the whole of the African-American experience. In an essay published in the Nation in 1926, Hughes wrote: "We younger Negro artists now intend to express our individual dark-skinned selves without fear or shame. If white people are pleased, we are glad. If they aren't, it doesn't matter."

People of all colors were pleased. Hughes went on to receive both Guggenheim and Rosenwald fellowships and was nicknamed the "Poet Laureate of Harlem." Several years after his death from cancer in 1967, Hughes' residence in Harlem was given landmark status by the New York City Preservation Commission; in 1969, the Langston Hughes Community Library and Cultural Center opened.

Langston Hughes has earned a place amongst the greatest poets America has ever produced. But more than that, Hughes has given a voice to the African-American experience. Like the sharp peal of a jazz trumpet, Hughes' poetry announced to the world that the streets of black America contained a culture rich and vibrant and fiercely poetic. This announcement was to become his life's mission, something he foretold in this little piece written long before he became a beloved household name.

But someday, somebody'll
stand up and talk about me
and write about me
black and beautiful
and sing about me
and put on plays about me!
I reckon it'll be
me myself!
Yes, it'll be me.

Langston Hughes and the *Chicago Defender* - Essays on Race, Politics, and Culture, 1942-62 Edited by Christopher C. De Santis.
Academy of American Poets | Biography of Langston Hughes - Features poems by Langston Hughe sand related educational resources. From the website: "Poets.org is produced by the Academy of American Poets. The site was launched in 1996, becoming the original online resource for poems, poets' biographies, essays about poetry, and resources for K-12 teachers."
Biography of Langston Hughes from the Poetry Foundation - Features poems by Langston Hughe sand related educational resources. The Poetry Foundation is an independent literary organization committed to a vigorous presence for poetry in American culture. It exists to discover and celebrate the best poetry and to place it before the largest possible audience. 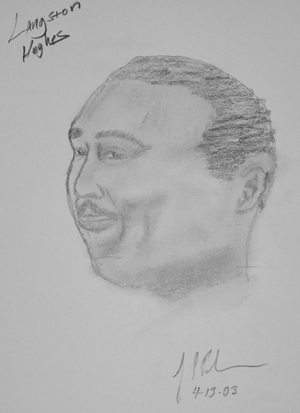 John Badolian felt so touched by the poems of Langston Hughes that he drew his picture, and sent it to MY HERO. </align="center">