by Lei Li - MY HERO Intern - from Pittsburgh, Pennsylvania in United States

American artist Morris Louis (1912-1961), a major figure of the Washington Color school movement in the 1950s, is famous for using vertical strains of colors on raw canvas. While a lot of articles about Louis center around his innovative painting techniques and impact on the abstraction genre, this story is going to explore Louis's reflection on his identity as a Jewish artist in the "Charred Journal" paintings.

The "Charred Journal" is a series of emblematic paintings that refer to the burning of Jewish literatures during World War II carried out by the Nazis. These paintings are among his earliest art productions, displaying more complexity in composition and more symbolic messages compared to his later works, which focus more on abstract forms, color, and techniques. (Here is the link to the Charred Journal series: http://morrislouis.org/paintings/gallery/early_paintings/all) 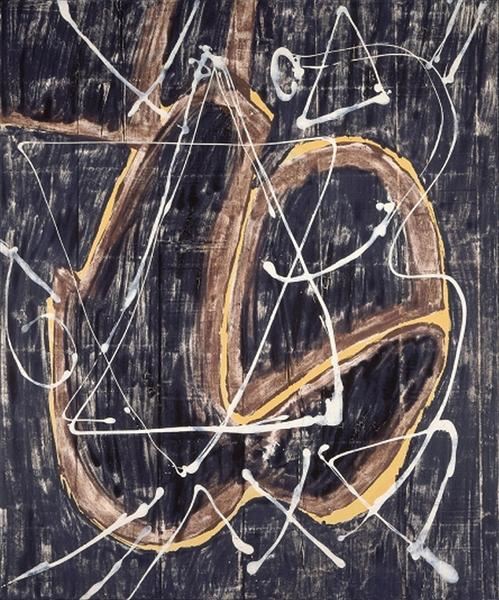 Man Reaching For A StarMorris Louis, Public Domain via WikiArt

A touching piece called Man Reaching For A Star from the "Charred Journal" attempts to convey a message about hope by utilizing symbols and colors. Placed in the center of this painting is the Star of David, immediately reminding viewers about the Jewish community. The Star of David appears on the national flag of the state of Israel, synagogues, and as symbols of Jewish communities all over the world. The darkened background of this painting resembles a surface of burned paper, and as the star of David rises up and is being placed in the center, this image transfers a sense of hope on Jewish culture's revival after destruction.

Other paintings from the "Charred Journal" also follow the same pattern of composition; for instance, in Charred Journal: Firewritten II, white swirls and symbols on rough painted backgrounds symbolize letters and numbers survived from ashes after being burned by fire. It implies a continuation of Jewish culture; after the fire destroyed massive amounts of literature, new literatures and narration will be developed on the base of those survived records.

Lots of artists recorded what they saw and experienced in concentration camps after the war. Those art works documented Jewish people's pain and endurance. Although Louis's "Charred Journal" series is a less direct response to the Holocaust as abstraction art, it encourages the viewers to remember the Holocaust with hope and resilience.