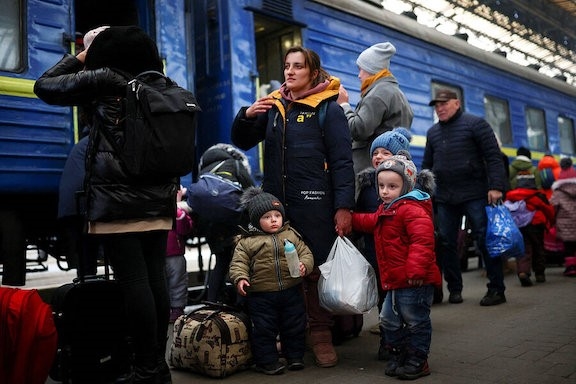 A family fleeing Russia's invasion of Ukraine arrives at a train station in Lviv, Ukraine, March 1, 2022. More than 800,000 refugees have escaped to Poland, Hungary, Moldova, Slovakia, and Romania as the Russian military escalates its attacks on cities across the eastern two-thirds of Ukraine. Thomas Peter/Reuters

Mother held son in her arms as missiles and rockets thundered down on Kharkiv and the entire world sounded as if it might end. In an underground subway station in Ukraine’s second-largest city, Valeriya Portnianka and young Matvey huddled with hundreds of other residents, wondering if they would ever again walk up into the light.

One day blurred into the next, then another. On the fourth day, 94 hours after descending into the gloom, Ms. Portnianka gathered her son and their lone suitcase. They boarded a train from Kharkiv on Ukraine’s border with Russia to the capital of Kyiv, and from there continued west to Lviv. Some 22 hours later, forced to abandon home, work, and the order of life, she clasped Matvey’s hand as they waited to board a bus Tuesday bound for Poland.

“It was ...” She pauses to wipe away tears, her face wan beneath the hood of a blue wool coat. “It was nothing you can describe. It was a feeling of dying while you are alive.”

Ms. Portnianka and her son belong to the ever-rising tide of Ukrainians fleeing the country as Russia’s invasion enters its second week. More than 800,000 refugees have escaped to Poland, Hungary, Moldova, Slovakia, and Romania as the Russian military escalates its attacks on cities across the eastern two-thirds of Ukraine. Defense officials in Kyiv reported Wednesday that more than 2,000 civilians have died. 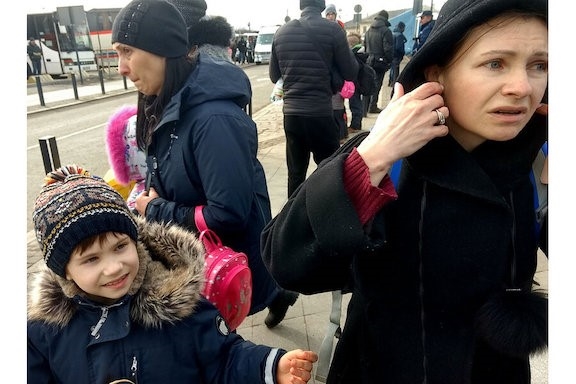 Martin Kuz, CSMValeriya Portnianka and her son, Matvey, prepare to board a bus bound for Poland from Lviv in western Ukraine, March 1, 2022. They arrived earlier in the day by train after escaping Kharkiv, where they spent 94 hours in an underground subway station as Russian forces shelled the city.

The majority of those displaced by the war find safety in Poland, where officials estimate that 50,000 Ukrainians arrive daily. In Lviv, the last large city before the border, the train station has seen a crush of refugees, whose relief at eluding harm collides with sorrow over leaving home as they journey toward uncertainty.

Irina Kopil, the mother of two children, pulled into the station Tuesday morning from Vinnytsia. The city of 375,000 people, southwest of Kyiv and home to the headquarters of the Ukrainian air force, has absorbed missile strikes as air-raid sirens blare day and night.

She joined two other mothers and their children from Vinnytsia on the ride to Lviv, and the group planned to catch another train later in the day across the border. From there they would travel to the Polish city of Lublin to stay with a host family and try to piece together the future.

“You feel everything – anger, panic, fear, sadness,” says Ms. Kopil, gray scarf wrapped around her neck against the winter cold. Her son giggles as he runs in circles nearby. In a murmur, she shares that her husband, a member of the country’s territorial defense force, stayed behind in Vinnytsia. “We do not know when we will see each other again.” 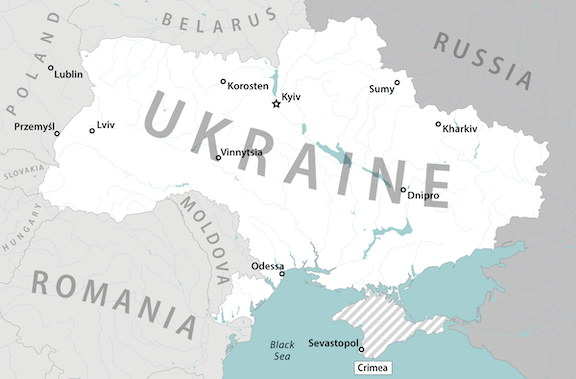 Women and children account for most of the train passengers arriving in and moving on from Lviv. Under a declaration of martial law, Ukrainian President Volodymyr Zelenskyy has required men ages 18 to 60 to remain in the country, seeking to fortify the country’s military.

Valeriy Zhylin escorted his teenage daughter, Maria, to Lviv from their village outside the city of Korosten, 40 miles south of Belarus, where Russian troops stationed along the border advanced into Ukraine last week.

“We hope that maybe in a week or two things will improve,” says Mr. Zhylin, a physical education instructor at a secondary school who has joined his village’s defense force. As Maria prepares to take a train to the Polish border town of Przemyśl, they turn toward each other and embrace. Their wordless grief gives way to tears.

Watching her climb aboard, he says, “I still cannot believe we are in this nightmare.” 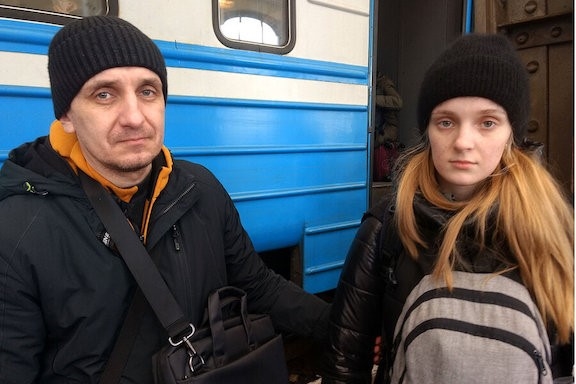 Martin Kuz, CSMValeriy Zhylin prepares to say goodbye to his teenage daughter, Maria, before she leaves by train from Lviv in western Ukraine for Poland, March 1, 2022. “I still cannot believe we are in this nightmare,” Mr. Zhylin says.

Wrenching separations occur with each train departing for Poland. A group of people begs a conductor to board a car already packed with passengers. He relents after a time and allows several of them up the stairs before telling the others to wait for the next train due in four hours. He closes the door and brings his hands to his face as if in prayer, his eyes wet, his anguish apparent.

The discarded artifacts of innocents caught in the chaos of war lie scattered across the platform. Security guards gather the items – blankets, suitcases, backpacks – and stack them against a wall. An abandoned baby stroller stands beside the tracks as a train begins rumbling westward.

The Russian invasion has destroyed daily routines and long-sought dreams. Days before Russian President Vladimir Putin ordered troops across the border, Natalia Tkachenko received a notice of approval for a visa to move to the United States. 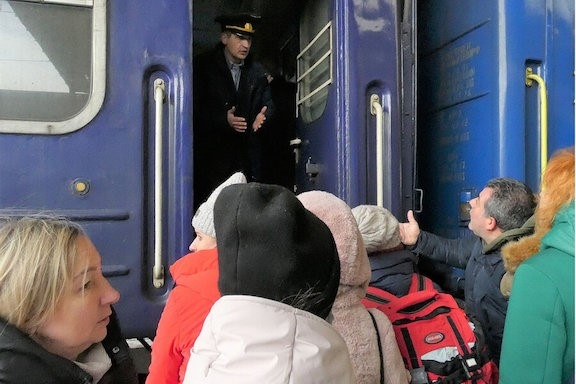 Martin Kuz, CSMValeriy Zhylin prepares to say goodbye to his teenage daughter, Maria, before she leaves by train from Lviv in western Ukraine for Poland, March 1, 2022. “I still cannot believe we are in this nightmare,” Mr. Zhylin says.

She intended to join her husband in Texas later in March. But her final appointment to obtain the visa was scheduled for this week. So on Tuesday, Ms. Tkachenko, a lab technician in the eastern city of Dnipro, stands beside a train headed to Poland, along with her two sisters and their five children.

“Now everything has changed,” she says, clutching her passport and bringing a hand to her forehead. “I am terrified. I have no answers.”

The city of Lviv has rallied to the cause of aiding refugees passing through to Poland and other countries. Volunteers hand out sandwiches, bottled water, and blankets to the mass of travelers inside the train station. Blue tents set up outside by the fire and police departments provide space for people to stay warm and charge mobile devices.

Ivan Slotylo and Renata Kukul, a husband and wife who live in Lviv, showed up at the station in the morning to help distribute food and information to their exhausted fellow Ukrainians. Mr. Slotylo, a web designer, explains that while the war has spared the country’s western region for the most part, residents here feel a deep solidarity with those forced to flee home.

“Putin didn’t just attack some of us. He attacked all of us,” Mr. Slotylo says. “Our country needs us.”

A few blocks from the train station, in an art gallery complex converted into a collection center for donated goods, volunteers organize care packages with canned goods, toilet paper, water, and other essential items. They send the packages to villages and military units in the region as the commercial supply chain falls apart.

Yuri Popovych, a volunteer coordinator at the site and the owner of a software development firm, relates that the hub started operating three hours after Russia invaded Ukraine. He chokes up describing why he participates in the effort.

“This is a war that will leave scars on the souls of our people for generations,” he says. “You can’t just do nothing.” 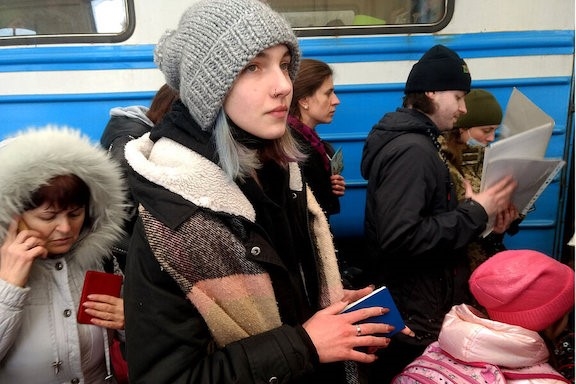 Martin Kuz, CSMNastia Grebenkova waits to board a train headed to Poland from Lviv in western Ukraine, March 1, 2022. The university student traveled alone across the country this week from the eastern city of Sumy, which faced heavy shelling by Russian forces. “I worry I am now without a country,” she says.

A broader sense of cooperation has spread across the European Union in response to the war. A proposal to extend temporary asylum for up to three years to Ukrainian refugees entering the union’s 27 member countries appears headed toward approval this week.

The prospect of a warm welcome elsewhere in Europe offers a measure of solace to Nastia Grebenkova. The university student traveled alone across the length of the country this week, arriving by train in Lviv after a 27-hour journey from the northeastern city of Sumy, where she studies ecology.

Ms. Grebenkova, who wears a gray knit cap the color of her dyed hair, escaped as Sumy endured heavy shelling by Russian forces. Waiting to board a train to Przemyśl, she admits that her outward calm conceals a fear that she will never again set foot in her homeland.