"Let the seed be exhaustless, let it never get exhausted, let it bring forth seed next year." - peasant prayer 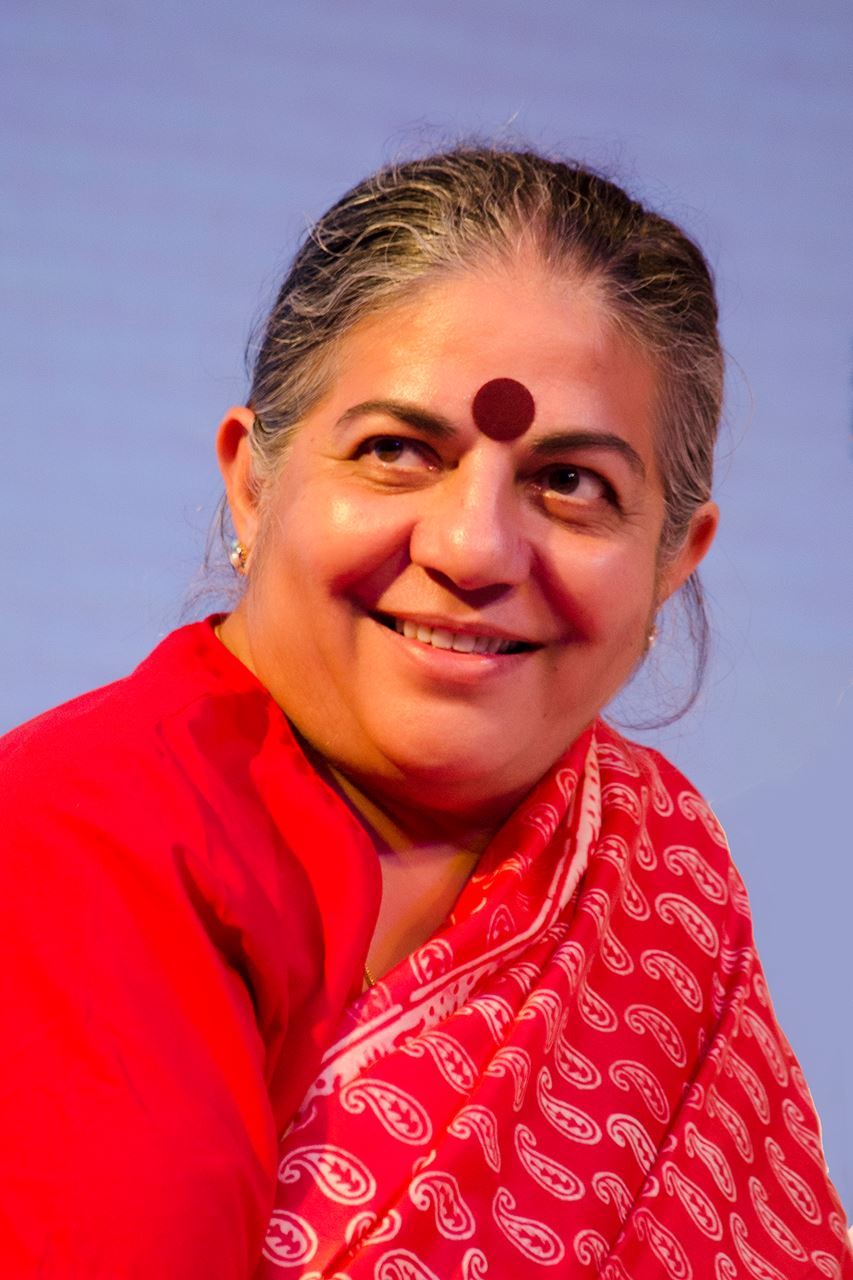 Dr. Vandana ShivaAugustus Binu [CC BY-SA 3.0 (https://creativecommons.org/licenses/by-sa/3.0)]Besides being a physicist, ecologist, activist, editor and author of numerous books, Dr. Vandana Shiva is a tireless defender of the environment. She is the founder of Navdanya, a movement for biodiversity conservation and farmers' rights. She is the founder/director of the Research Foundation for Science, Technology and Natural Resource Policy. Her most recent books are entitled, Biopiracy: The Plunder of Nature and Knowledge and Stolen Harvest: The Hijacking of the Global Food Supply.

As a young girl gazing out at the natural wonders of her Indian homeland, the verdant valley of Dehradun and awe-inspiring Himalayas, Dr. Vandana Shiva was inspired not so much to preserve nature as to figure out how it works. In order to accomplish this task, would young Vandana follow in the footsteps of her father, a conservator of forests? Or would she become more like her mother, a farmer with a profound love for nature? The answer, as it turned out, would be neither. Vandana would follow her hero, Albert Einstein. She would become a physicist.

Nuclear physics was Dr. Shiva's chosen specialty until she realized that the science had "dark side to it." She changed course to become a theoretical physicist and worked in foundations of quantum theory. She was working on her PhD at the University of Western Ontario in Canada, fully expecting to stay on and become a professor when she was confronted with the nagging thought that she wasn't informed enough about how society works. "We (India) have the third biggest scientific community in the world. We are among the poorest of countries. Science and technology is supposed to create growth, remove poverty. Where is the gap?" She wanted to answer that question for herself, so she took three years off to "look at science policy issues...be a little more educated, socially, and then go back to physics." It was off to the Indian Institute of Science and the Indian Institute of Management in Bangalore where she studied interdisciplinary research in science, technology and environmental policy.

After three or four years, what started as a "look at policy issues," became the focus of Dr. Shiva's life. Speeding her along a course that would ultimately lead to grassroots activism was Dr. Shiva's growing reputation as an authority in the field of environmental impact. Dr. Shiva found herself learning more and more about the threat to biodiversity posed by biotechnology.

"In '87, at one of these seminars, the (agriculture) industry laid out its grand dream of controlling the world. They talked about needing genetic engineering so that there's a technology that they have that peasants can't use so that they can have a monopoly through technology. Patents."

It was then that Dr. Shiva founded the Research Foundation for Science, Technology and Ecology. She dropped everything else, her work on dams and forests and mines, to focus on biotechnology and patenting, the very tools being used by huge multinational corporations in their quest to control the global pharmaceutical and food supplies. Though ideas like these sound like the stuff of science fiction novels, the groundwork, Dr. Shiva explains, has already been laid.

"If a patent is granted, for example, on seed it means a farmer who grows a seed cannot save seed from the harvested crop because that is constituted as making the seed and the exclusive right to the seed belongs to the company. It means seed-saving by farmers is now defined as intellectual property theft."

In 1991, Dr. Shiva founded Navdanya, a national movement to protect the diversity and integrity of living resources, especially native seeds. Dr. Shiva's attention is now focused on preventing imperialism over life itself. "I don't want to live in a world where five giant companies control our health and our food."

The Seed Satyagraha is the name for the nonviolent, noncooperative movement that Dr. Shiva has organized to stand against seed monopolies. According to Dr. Shiva, the name was inspired by Gandhi's famous walk to the Dandi Beach, where he picked up salt and said, "You can't monopolize this which we need for life." But it's not just the noncooperation aspect of the movement that is influenced by Gandhi. The creative side saving seeds, trading seeds, farming without corporate dependence- without their chemicals, without their seed.

"All this is talked about in the language that Gandhi left us as a legacy. We work with three key concepts."

(Two) Swaraj--to govern yourself. And we fight on three fronts-"water, food, and seed. JalSwaraj is water independence--water freedom and water sovereignty. Anna Swaraj is food freedom, food sovereignty. And Bija Swaraj is seed freedom and seed sovereignty. Swa means self--that which rises from the self and is very, very much a deep notion of freedom. I believe that these concepts, which are deep, deep, deep in Indian civilization, Gandhi resurrected them to fight for freedom. They are very important for today's world because so far what we've had is centralized state rule, giving way now to centralized corporate control, and we need a third alternate. That third alternate is, in part, citizens being able to tell their state, `This is what your function is. This is what your obligations are,' and being able to have their states act on corporations to say, `This is something you cannot do.'"

(Three) Satyagraha, non-cooperation, basically saying, `We will do our thing and any law that tries to say that (our freedom) is illegal we will have to not cooperate with it. We will defend our freedoms to have access to water, access to seed, access to food, access to medicine.'"

When viewing Dr. Shiva's work in protecting the world's biodiversity, her courage and determination in standing up for the biological heritage that can be symbolized in the seeds that pass from one neighbor's hand to another's, one can't help but see the little girl standing in the shadows of the mighty Himalayas, wanting to know, more than anything, how nature works. And it would appear, after a half a century of walking on this Earth, she's come to a conclusion she wants to share with all of us. Nature works beautifully, abundantly, for all of us. But we cannot allow biodiversity to take a backseat to profit. We cheapen our own cultural heritage when we write it off as the expense of doing business. And we make the land, the water and the biologically diverse world from which we come a golden goose to satisfy the hunger of the few.

Center for Humans and Nature - Vandana is on the board of directors.
Navdanya - Navdanya is a network of seed keepers and organic producers spread across 18 states in India.

For her contributions to deepening the ecological paradigm, and for linking research to action, Dr. Shiva has received many awards including the following:

1. Order of the Golden Ark, 1993, by his Royal Highness, Prince Bernhard of the Netherlands for her outstanding services to conservation and ecology.

4. Alternative Nobel Prize (Right Livelihood Award), 1993, for her pioneering insights into the social and environmental costs of the dominant development process, and her ability to work with and for local people and communities in the articulation and implementation of alternatives.ï¿½

5. VIDA SANA International Award, 1993, Spain, for her contribution to ecology and food security.

6. "Pride of the Doon" Award from Doon Citizen Council, Dehra Dun, India, 1995, in recognition to her distinguished contribution to the region.

7. The Golden Plant Award (International Award of Ecology), Denmark, 1997, for her remarkable contribution to ecology and environment.

8. Alfonso Comin Award, 1997, Barcelona, Spain, for important contributions both scientifically and personally to the ecologist and feminist movement in India, widening their fields towards a greater perspective where struggles related to gender, ecology, ethnicity, class and human rights meet.

9. Commemorative Medal by Her Royal Highness Princess Maha Chakri Sirindhorn of Thailand on the occasion of the Celebration of the 18th World Food Day organized by FAO Regional Office for Asia and the Pacific, Bangkok on 16 Oct 98.

10. Medal of the Presidency of the Italian Republic from the International Scientific Committee of the Pio Manzu Centre at Rimini, Italy, during the XXIV Pio Manzu International Conference on "The Horizons of Hermes" on 18 Oct 98.

11. Pellegrino Artusi Award 2000, Italy, for original contribution to reflections on relations between humans and food.

12. HORIZON 3000 Award of Austria on May 10, 2001, in recognition to rendering useful service for defending human rights and preservation of peace and for the vision of a worldwide fair development in the third millennium.

13. Awarded by the ASIA WEEK Magazine as one of the top five most powerful persons in Asia. For services rendered as an ecologist aiming for preserving world ecology, she has been among the 50 most powerful people recognized.

I. Dr. Shiva is recognized for her contributions to the fields of women and environment, biodiversity, biotechnology, intellectual property rights and ecological issues related to agriculture. Her books include the following:

In addition, Dr. Shiva is author of over 300 papers in leading scientific and technical journals.

Paget-Clarke, Nic. "An Interview with Vandana Shiva." In Motion Magazine. 2003. 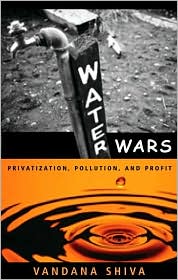 International Day for Biological Diversity | May 22

Vandana Shiva's Inspiration by by Viktoria of Ore