Rainforests are ecosystems that house an amazing diversity of species –animals, plants, trees, insects, and more. Scientists have observed that the Earth’s tropical rainforests are being affected negatively by both climate changes and human activity. The team from the Jason Project will be working with scientists from The Smithsonian Tropical Research Institute. Built in 1923, the STRI research station provides a home for scientists from around the world who collect data that helps us understand the need to protect rain forests.

The Isthmus of Panama is a land bridge that formed over 3 million years ago, uniting the continents of North and South America. Panama is located north of Colombia and south of Costa Rica, just north of the equator. Because of its location it enjoys beautiful warm weather almost all year around, and is mostly covered by lush tropical rainforests.

Barro Colorado Island sits in the waters of Lake Gatun at the northern end of the Panama Canal. The island was formed during the construction of the Panama Canal between 1912 and 1914. When the Chagres river was dammed, the water level rose, flooding the area that is now Lake Gatun. A small hill was separated from the land and surrounded by the water, becoming Barro Colorado Island. With its 3,707 acres, it is the largest island in Lake Gatun.

Barro Colorado Island is reached only by boat, from the village of Gamboa, 22 miles from Panama City. In 1923, upon the request of a group of scientists, the island was declared a Biological Reserve. A research laboratory was built there, which became the first Tropical Rainforest Biological Reserve of the Western Hemisphere. In 1946 the Smithsonian Tropical Research Institute (STRI) was given the responsibility of administrating and managing the reserve. In 1979, along with a few neighboring mainland peninsulas, the Barro Colorado region was declared a Natural Monument. The island houses an amazing variety of life. The Smithsonian Tropical Research Institute works to protect the delicate ecosystem that exists there by limiting the number of people that can visit the island.

The students and teachers who have been selected to participate in the Jason Project are very fortunate to join a renowned team of scientists from around the world to study the delicate ecosystem that thrives on Barro Colorado Island.

A Walk in the Rainforest
Kristin Joy Pratt-Serafini 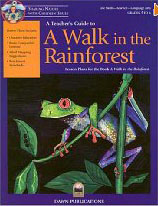 A Teacher''s Guide to a Walk in the Rainforest
Carol Malnor

Dr. Robert Ballard has been featured for several years on the MY HERO web site. He is a well known explorer and educator and the founder of an amazing science research project used by millions of students around the world called, The Jason Project.

For over a decade Jason Expeditions have taken place around the globe.

This year the Jason Project XV expedition will be exploring the “Rainforests at the Crossroads” in Panama's Barro Colorado Island from January 26-February 6, 2004. The team of 24 students and 8 teacher “Argonauts,” along with a team of researchers and scientists, will explore Panama’s delicate and highly valuable resource, the rainforest.

The Smithsonian Tropical Research Institute sits in a cove on Barro Colorado Island. Built in 1923, the research station provides a wonderful home for scientists from around the world and will be the host for this years Jason expedition.