Amazon Frontlines: "Who Should Decide the Future of the Amazon?" Wins Film Fest Environmental Award 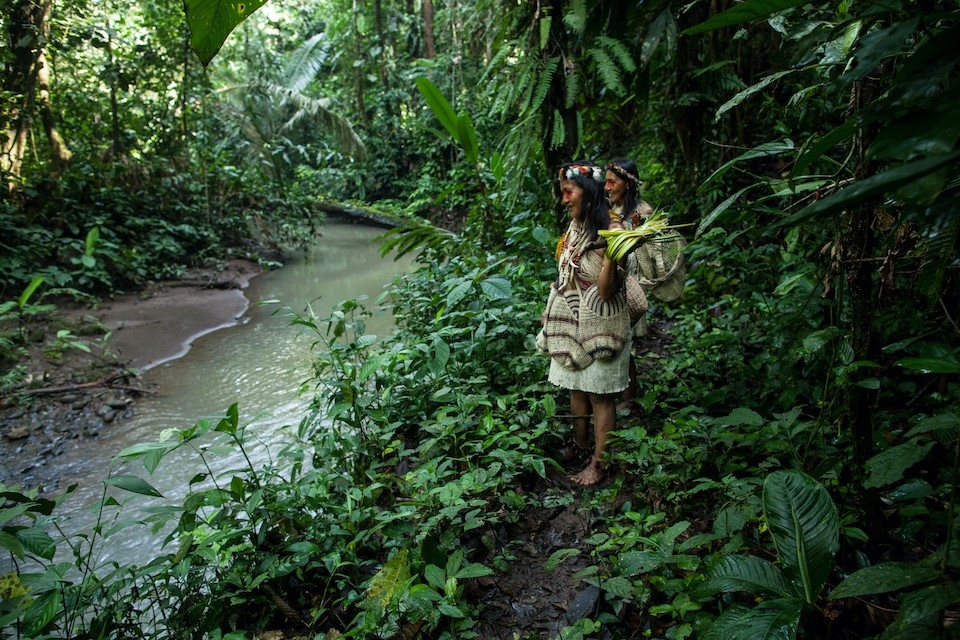 The incredible film, Who Should Decide the Future of the Amazon? -- directed by Martin Kingman and produced by Amazon Frontlines, has been awarded the Environmental Hero Award in MY HERO’s 18th International Film Festival.

The powerful, two-minute video documentary concerns the climate crisis in the western Amazon, created by the ongoing destruction of the traditional territories of the Indigenous people of the region who have safeguarded their lands for centuries. For the last half a century, the onslaught of crude oil drilling, monocropping, cattle farming, logging, mining, and other forms of unrelenting resource extraction have been depleting Indigenous peoples’ capacity to sustain their territories.

The film was created for the "Who Should Decide?" campaign by Amazon Frontlines with the Waorani, Kofan, the Ceibo Alliance and the regional (COICA), national (CONAIE), and Amazonian (CONFENIAE) Indigenous federations: “It is a global campaign which aims to raise awareness of the urgent need to respect Indigenous people's right to decide over the future of their territories, cultures and lives, and to catalyze global action and support for frontline communities in the Amazon Rainforest.”

With brilliant scenes of natural beauty and the everyday life of the Indigenous peoples who live there, the film asks, “Should the loggers decide the future of the Amazon? The oil executives? The miners?” 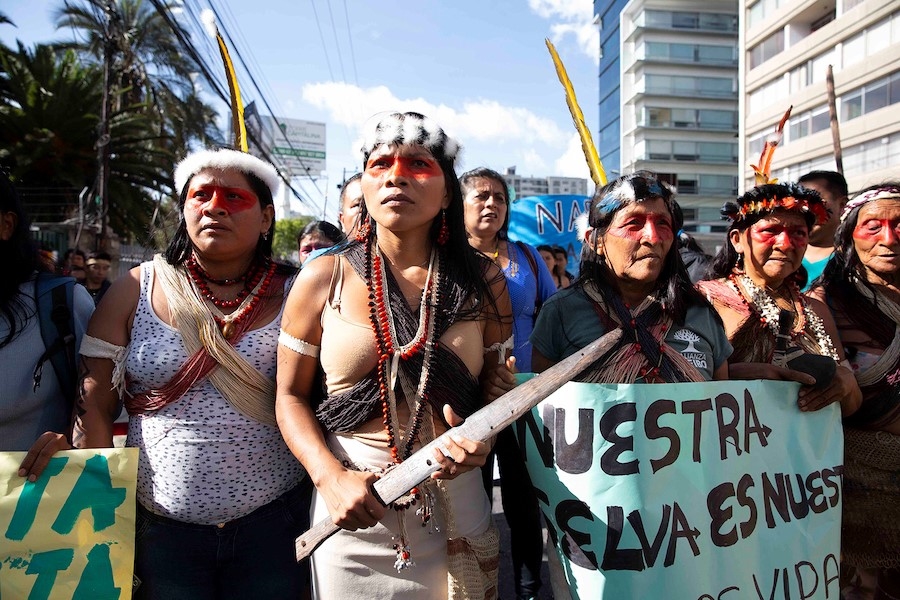 Waorani leader Nemonte Nenquimo alongside other Waorani women protest against oil drilling in their ancestral territory during a mobilization in the city of Quito, Ecuador.Amazon Frontlines, with permission

As 2020 Goldman Prize Winner and Time Magazine Honoree Nemone Nenquimo said, “Indigenous peoples have defended our lands for thousands of years and our leadership must be respected and supported if we are to save our planet and future generations from destruction.” Most importantly, it is the Indigenous peoples who live in the Amazon Rainforest who should decide the future of the Amazon.

Amazon Frontlines, along with the Indigenous-led Ceibo Alliance, works on concrete solutions with over 60 communities from the Siona, Secoya, Kofan and Waorani indigenous Nations in Ecuador, Peru and Colombia—four nations with over 20 villages in each nation. 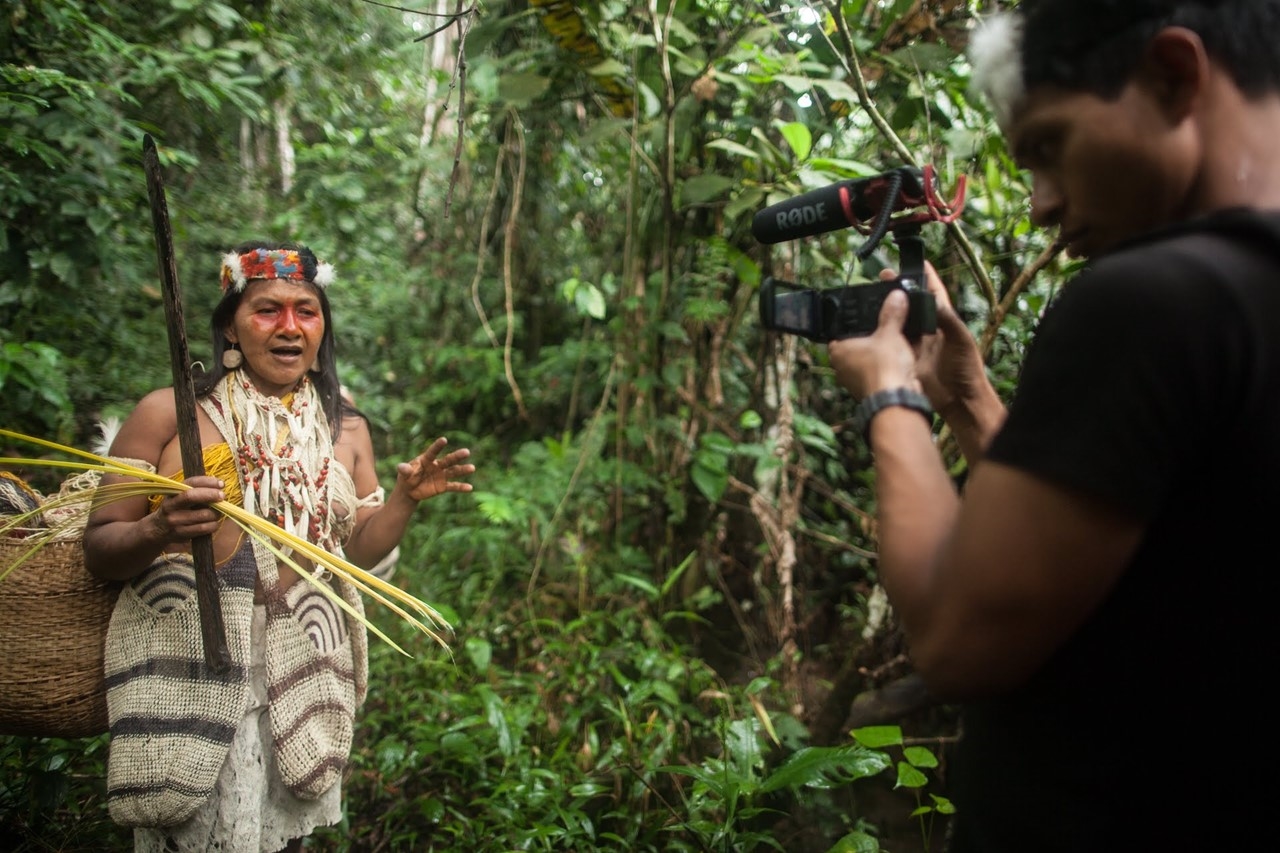 But thousands of years of cultural knowledge is now on the verge of disappearing. This includes Indigenous hunting, fishing, and agricultural techniques; plant medicines and healing systems; language, stories, and myths; as well as world views and pathways to spiritual enlightenment.

The path is clear: we can’t protect the climate or stop the extinction crisis if we don’t protect the Amazon Rainforest and the cultures of its Indigenous stewards.

The work of Amazon Frontlines stems from the belief that:

Cultural pillars and keystone practices can only be identified by the Indigenous people themselves. From there, we work to promote cultural practices by practicing them, we recover traditional plants by planting them, and we work to reconnect youth with the forest and its spirits through ceremonies that have served that very function.

The organization is training Indigenous youth to use film, photography and other storytelling techniques to transmit the ancestors’ cultural knowledge and histories, creating extraordinary films that allow the world to understand their changing realities. 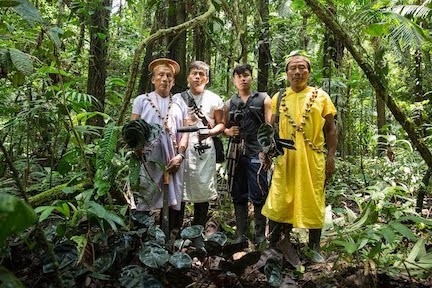 Siekopai youth and elders work together to create a documentary on the medicinal plant knowledge of their people. A documentary team (from left to right) Roberto Piaguaje, Jimmy Piaguaje, Ribaldo Payaguaje, and Gilberto Payaguaje pose for a portrait during a plant-collection expedition. Amazon Frontlines, with permission

According to the organization’s Co-Founder and Director, Mitch Anderson, a powerful aspect of Indigenous cultures is their stories:

Stories help us to understand our lives and what’s happening all around us, our idea of ourselves and what we must do. We are blessed to live and breathe Indigenous culture. People need to tell their stories to help see themselves in the 21st century, to see how stories transform the road ahead.

Flor Tangoy, Siona Nation, powerfully states: “Our elders are passing away, and with them thousands of years of knowledge is at risk of disappearing. Our stories have the power to keep our knowledge alive for future generations.” “Now more than ever,” the organization states on its website, “Indigenous stories must be told, passed down to future generations and also shared with the outside world, whose destructive way of life is the root cause of cultural loss.”

While the Indigenous people must decide the future of the Amazon, they cannot accomplish their goals without the help and support of the outside world. Amazon Frontlines and Ceibo Alliance are building global allies, particularly for their legal battles The Amazon Frontlines team is composed of an international group of human rights lawyers, environmental activists, forestry specialists, environmental health scientists, filmmakers, journalists, anthropologists, and farmers, along with partners and others who want to help.

MY HERO asked Anderson about the problems Indigenous youth are facing today:

There’s a lot of talk about reaching an ecological tipping point – the climate crisis due to clear-cutting roads--environmental degradation hitting the tipping point in the Amazon. It is a severe situation, but there is less talk about culture.

Indigenous people are the owners of roughly half of the Amazon Rainforest. This is some of the best-protected primary forest – there is a real threat to Indigenous stewardship: stewardship requires the cultural incentive to care for the forest for food, medicine, shelter, and meaning.

I have been living in the Amazon for 15 years. As we are surrounded by the dominant socio-economic system, capitalism, cultural systems, roads, and so forth, youth are getting drawn into city, into the monetary economy. Some of our people are seeing the dominant society as the future, putting elders and the way of the forest in the past. Some are starting, like outsiders, to see the Amazon as a place to extract resources.

He explained to MY HERO that youth living close to oil roads have less connection to their culture. The 90% destruction along the road creates habitat loss, so the land can’t support the community, leading to a situation in which the community has to depend on money and wage labor.

This, Anderson says, requires “redemptive globalizations”-- connections and solidarity to support local initiatives to fight waves and waves of unrelenting resource extraction. And it requires listening to the people who have safeguarded the Amazon Rainforest for centuries. 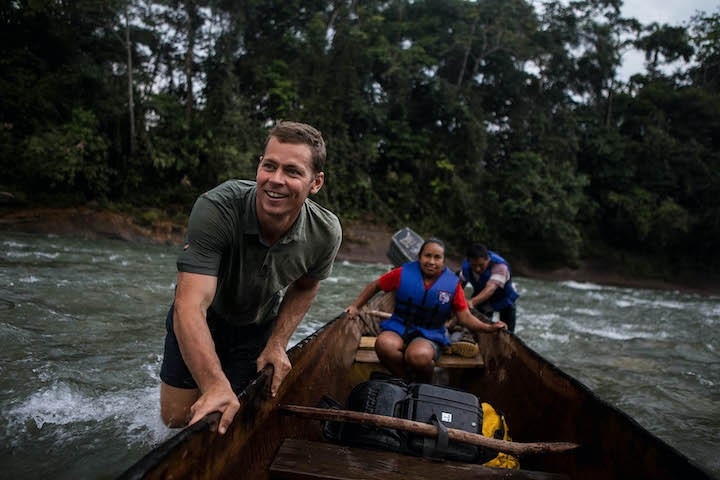 MY HERO’s Interview with Mitch Anderson, Co-founder and Director of Amazon Frontlines

In an extended interview, MY HERO asked Anderson to tell us about himself and what led him to live and work in the Amazon Rainforest.

Anderson was born and raised in California, where he grew up in the city suburbs, “where we take for granted where food, water, and gas comes from,” he told MY HERO. But coming from a supportive and loving family that encouraged free thinking and journeying, he was free to pursue his passions.

He started working with Indigenous people in his twenties. He said he had his “unsheltering” at Berkeley when he became aware of the plights of Indigenous peoples and began traveling, later living and working with the Mayans and Zapatistas in southern Mexico for three years. This is where he learned the importance of self-determination and self-government, gaining a powerful and clear understanding of what was happening and why, and what Indigenous people really need.

Anderson’s first time in the Amazon was in 2011, when he started working with Amazon Watch. During the early months, a Kofan friend and leader, Emergildo Criollo, told him the story of his childhood--about seeing helicopters and the arrival of American oil companies. He saw trees being destroyed: it was the beginning of the oil boom, and there were toxic oil spills in their pristine rivers. Criollo lost his first two children to oil contamination.

“What was most enraging to me,” Anderson said, “were the American oil companies destroying the forests and Indigenous cultures, where the Indigenous people had been stewarding these forests for thousands of years.”

Anderson was involved in a Chevron lawsuit and the company was digging in its heels: “Chevron was spending millions to fight the Indigenous people--it was monstrous. It took four years to hold Chevron to account. We realized then that there would be no concrete results without clean water.”

A strong believer in self-determination and the power of listening, in 2011 Anderson asked the Indigenous nations of the region what they wanted to work on. They responded, “Education and clean water.” With Indigenous peoples of the region working together, their Clear Water Project installed 12,000 rainwater systems. They started working with the schools and developed global partnerships. Youth wanted to revive traditional knowledge and achieve self-determination, choice, and self-sufficiency. In those early days, Anderson said, he met mostly youth – the “dreamers of the people,” who wanted to learn about each other’s cultures. 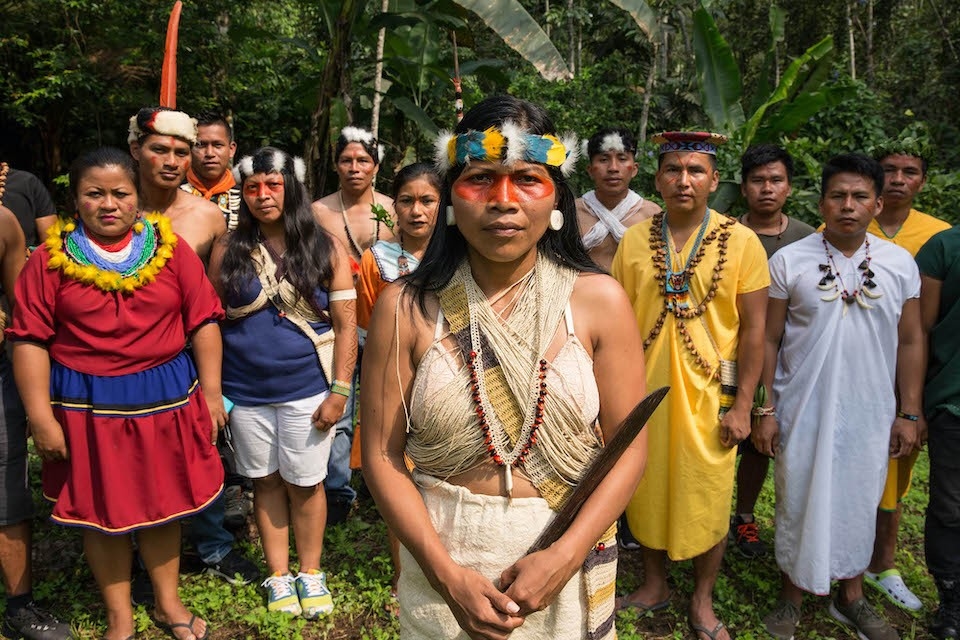 Anderson began building a project with Indigenous leaders: “Justice,” he says, “is not owned by capitalism or government. You can create justice and build prosperity from the ground up—and ensure clean water.”

We asked him about his partnership with Nemonte Nenquimo. When they met, he said, Nemonte was a young leader who loved her culture and elders. Living with the Waorani and building water systems together, Nemonte became a dear friend and the two later married, becoming a powerful force in their work to sustain the rainforest. 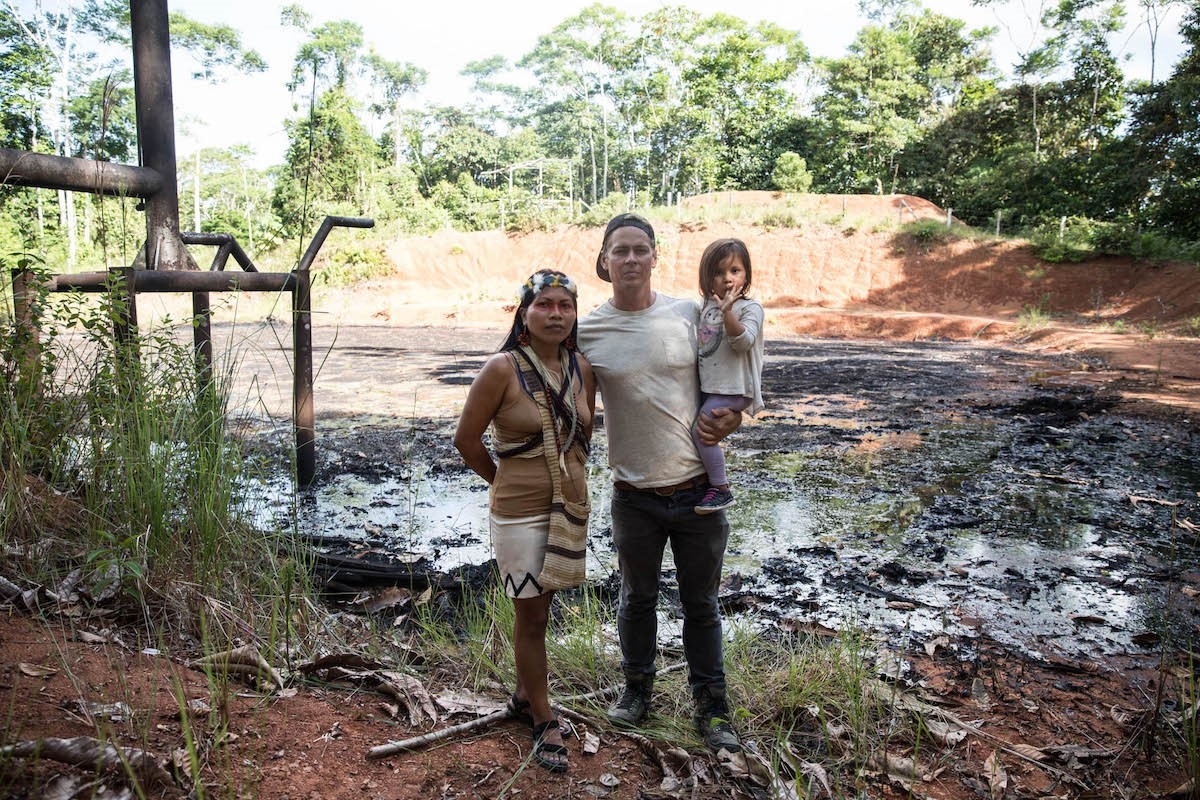 Waorani leader Nemonte Nenquimo and Amazon Frontlines Founder Mitch Anderson, with their daughter Daime, stand alongside a toxic waste pit of crude oil in the northern Ecuadorian Amazon near the city of Lago Agrio. Amazon Frontlines, with permission

Anderson and Nenquimo founded the Clear Water Project, Amazon Frontlines, and the Ceibo Alliance with a common vision to protect Indigenous lands and people’s ability to thrive on their territories. Amazon Frontlines, Anderson said, was created to support Ceibo to use cutting edge technology, youth patrols to document illegal incursions, and to build a legal team to use the law to protect their territories from illegal logging, mining, and poaching and to protect Indigenous rights.

“I’m furious about what happened to the people, land, and rivers,” Anderson told MY HERO. “We realized we needed to build organizations and develop a comprehensive strategy that involved elders and youth, and ultimately save the Amazon and the climate for all of us.”

What Anderson recommends is that we listen to, support, and ultimately build with Indigenous peoples of the Amazon—the people closest to the land, and support the youth to become future leaders who will make the important decisions for the future: “We must have the courage to listen.”

*Over the coming months, the Amazon Frontlines & Ceibo YouTube channels will also become important platforms for the exhibition and screening of films by youth--an exciting work in progress.

See related films on MY HERO:

Read related MY HERO stories about the films and filmmakers:

About Amazon Frontlines' and Ceibo Alliance's big win in 2018:

Who Should Decide The Future of the Amazon?