Cesar Chavez did a lot of things to better the lives of Mexican farm workers at a time when no one knew about the poor working standards of migrant farm workers. He helped to establish UFW, whose goal was to have a better work environment for those who worked the fields of America. Chavez stood up to the owners on behalf of all of the Mexican people who were afraid to speak out for fear of losing their jobs and being deported if they were illegal immigrants. For these reasons and others, I consider Cesar Chavez one of my heroes.

"The end of all education should surely be service to others."

Cesar Estrada Chavez was born March 31, 1927, on a small farm near Yuma, Arizona. He learned about justice and injustice early in life. The small adobe home where he was born was swindled from his family by dishonest people. Chavez's father agreed to clear eighty acres of land and in exchange he would receive the deed to forty acres of land that adjoined the home. The agreement was broken and the land sold to a man named Justus Jackson. Chavez's dad went to a lawyer who advised him to borrow money and buy the land. Later, during the Depression, when Chavez's father could not pay the interest on the loan, the lawyer bought back the land and sold it to the original owner. Later, Chavez would say "the love for justice that is in us is not only the best part of our being but it is also the most true to our nature."

In 1938 he and his family moved to California. He lived in La Colonia Barrio in Oxnard for a short period, returning to Arizona several months later. They returned to California in June 1939 and this time settled in San Jose. They lived in the barrio called Sal Si Puedes or "Get Out If You Can." Chavez thought the only way to get out of the circle of poverty was to work his way up and send his kids to college. He and his family worked in the fields of California from Brawley to Oxnard, Atascadero, Gonzales, King City, Salinas, McFarland, Delano, Wasco, Selma, Kingsburg, and Mendota.

Cesar Chavez, Migrant Workers Union Leader, 07/1972 U.S. National Archives’ Local Identifier: 412-DA-1576Pubic Domain. DOCUMERICA: The Environmental Protection Agency's Program to Photographically Document Subjects of Environmental Concern, compiled 1972 - 1977He did not like school as a child, probably because he spoke only Spanish at home. The teachers were mostly Anglo and only spoke English. Spanish was forbidden in school. He remembers being punished with a ruler to his knuckles for violating the rule. He also remembers that some schools were segregated and he felt that in the integrated schools he was like a monkey in a cage. He remembers having to listen to a lot of racist remarks. He remembers seeing signs that read "whites only." He and his brother, Richard, attended 37 schools. He felt that education had nothing to do with his farm worker/migrant way of life.

In 1942 he graduated from the eighth grade. Because his father, Librado, had been in an accident and because he did not want his mother, Juana, to work in the fields, he could not to go to high school, and instead became a full-time migrant farm worker.

Chavez served in the U.S. Navy from 1944-46. In 1948 he married Helen Fabela. They settled in Delano and started their family.While his childhood school education was not the best, later in life education became his passion. The walls of his office in La Paz (United Farm Worker Headquarters ) are still lined with hundreds of books ranging from philosophy, economics, cooperatives, and unions, to biographies on Gandhi and the Kennedys. He believed that, "The end of all education should surely be service to others," a belief that he practiced all his life.

In 1962 Chavez founded the National Farm Workers Association, later to become the United Farm Workers (UFW). He was joined by Dolores Huerta and the union was born. That same year, Richard Chavez designed the UFW Eagle and Chavez chose the black and red colors. Chavez told the story of the birth of the eagle. He asked Richard to design the flag, but Richard could not make an eagle that he liked. Finally he sketched one on a piece of brown wrapping paper. He then squared off the wing edges so that the eagle would be easier for union members to draw on the handmade red flags that would give courage to the farm workers with their own powerful symbol. Chavez made reference to the flag by stating, "A symbol is an important thing. That is why we chose an Aztec eagle. It gives pride . . . When people see it they know it means dignity."

In 1962 there were very few union dues-paying members. By 1970 the UFW was able to persuade grape growers to accept union contracts and had effectively organized most of that industry, at one point in time claiming 50,000 dues paying members. This was thanks to Cesar Chavez's tireless leadership and nonviolent tactics that included the Delano grape strike, his fasts that focused national attention on farm workers' problems, and the 340-mile march from Delano to Sacramento in 1966. The farm workers and supporters carried banners with the black eagle with the words HUELGA (strike) and VIVA LA CAUSA (Long Live Our Cause). The marchers wanted the state government to pass laws which would permit farm workers to organize into a union and allow collective bargaining agreements. Chavez made people aware of the struggles of farm workers for better pay and safer working conditions. He succeeded through nonviolent tactics (boycotts, pickets, and strikes). Cesar Chavez and the union sought recognition of the importance and dignity of all farm workers.

It was the beginning of La Causa -- a cause that was supported by organized labor, religious groups, minorities, and students. Cesar Chavez had the foresight to train his union workers and then send many of them into the cities where they were to use the boycott and picket as their weapon.

Chavez was willing to make great sacrifices so that the union would continue and so that violence was not used. In 1968 Cesar went on a water-only, 25-day fast. He repeated the fast in 1972 for 24 days, and again in 1988, this time for 36 days. What motivated him to do this? "Farm workers everywhere are angry and worried that we cannot win without violence," he said. "We have proved it before through persistence, hard work, faith and willingness to sacrifice. We can win and keep our own self-respect and build a great union that will secure the spirit of all people if we do it through a rededication and recommitment to the struggle for justice through nonviolence."

Cesar Chavez passed away on April 23, 1993, at the age of 66. The Cesar E. Chavez Foundation was established in 1993 by his family and friends to educate people about the life and work of this American hero. They have created a model curriculum to help youth understand his message of nonviolent activism. In honor of Cesar Chavez Day, the Foundation has worked with the California Governor's Office on Service and Volunteerism (GO SERV) to establish a service learning grants program.

As a result, on Monday, April 1, 2002 Californians from across the state, in both rural and urban areas, implemented programs to improve their communities and the lives of others. Activities promoted non-violence, justice, equality, tolerance, environmental stewardship and respect for humanity.

United Farm Workers - strives to provide farm workers and other working people with the inspiration and tools to share in society's bounty.
The Cesar E. Chavez Foundation - The foundation's mission is to enrich and improve the lives of farm worker and Latino families outside the work place by meeting their essential human, cultural, and community needs.
NPR: The Legacy of Cesar Chavez: March 31, 2004 - NPR's Tavis Smiley talks with his son, Paul Chavez, about the enormous legacy of the late Latino civil rights leader and crusader for nonviolent social change. 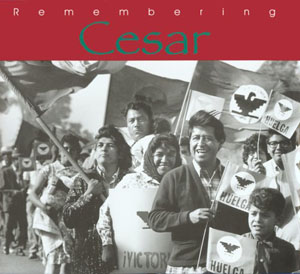