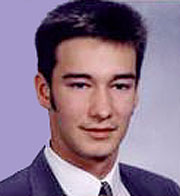 David Nathan Chain participated in Earth First! tree-sitting actions dedicated to saving the old-growth forests of California. Like Julia Hill, his activism enraged corporate interests. It also enraged individual loggers. On September 17, 1998, during a protest, a logger felled a tree in the direction of the protesters. The tree hit and killed David Chain. Although many witnesses claim that the logger had aggressively threatened the protesters prior to cutting down the tree, to this date, he has not been arrested or charged with any crime.

Chain's mother, Cindy Allsbrooks, wrote this memorial to her son:

David Nathan Chain was born in Pasadena, Texas on June 17, 1974. In 1994, David moved to Austin, Texas, to live with his childhood friend Chris Martin, whom David considered his brother.

It was in Austin where David heard about the Earth First! efforts and made a decision to go to California on a strong conviction he could help. He made that trip in 1997 and was gone for approximately three months. David came back to Austin with the intent to save his money and go back. He worked a couple of jobs to save money, and his friends helped him by giving him a place to live while in Austin. He went back to California in early September of this year and was there only a short time before his death.

I feel David's conviction had to do with the beauty he saw on his first trip to California and his desire to preserve the environment. This is what he believed was right. David was always a tender-hearted little boy and young man. He would help anyone. He saw the world as a much bigger place than most of us ever do.

David's father is David Allen Chain. David's stepfather is Ron Allsbrooks. David has two sisters, Sarah Joy Chain and Bridgett Leigh Campbell, whose three children, Jonathan Thomas, Haleigh Elizabeth, and Mathew David, David loved so very much. There are so many people who will miss David and forever hold his memory in their hearts.

<br=clear all> In a letter responding to Chain's death, activist Joe Keating of Portland, Oregon, wrote:

"David Chain is a hero. He joins the ranks of Martin Luther King, Gandhi, and Judi Bari. Let his memory inspire us to victory. Let our howls reverberate in every forest in this land to honor our fallen brother." 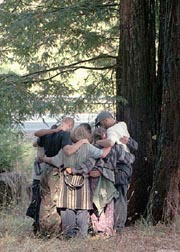 Save the Headwaters Forest Campaign
EnviroLink - is a hub for environmental websites.


Look at Environmental Protection Information Center for more information about how to save the last of wild California.

One of the United States' biggest environmental problems right now is loss of wilderness. This problem is due to an expanding human population and the ever-increasing demand for both material resources and physical space. Not only loss of wilderness, but destruction of wildlife habitat results. The over-harvesting of forests, which are dependent upon a combination of new and old-growth trees, is a prime example of wholesale habitat destruction. What are we going to to do about this?

Earth First! is a group of environmental activists who work--often at great personal cost--to save the natural world from human depredation. The following story involves an Earth First!er's efforts to protect the Headwaters Forest in Northern California.

In 1984, the MAXXAM corporation bought Pacific Lumber (PL), a logging company. Since that time, Earth First! alleges that PL has been overcutting the forest, and that this activity caused a mudslide which destroyed seven homes in the nearby town of Stafford, and wiped out thousands of acres of irreplaceable old-growth trees.