Learn about the important work of African-American mathematician Katherine Johnson,  with this multimedia showcase celebrating her birthday on August 26.

Katherine Johnson, born August 26, 1918, is an African-American mathematician who worked as an aerospace technologist for NASA and was the first woman in her division to have her name on a report. In 1962, astronaut John Glenn wouldn't begin his orbit around the moon without Johnson first checking all computer calculations by hand: "If she says they're good, then I'm ready to go."

By: Kyra from Ankara, Turkey
Her story was hidden for decades: Katherine Johnson plotted multiple flight courses for NASA, including the Apollo 11 spacecraft, the first spaceship to reach the moon.

By: Kyra from Ankara
A hero is a person who has managed to remain in our collective memory for their extraordinary achievements. What, then, is an unsung hero? I believe that that is what we call someone who should have been remembered, but was erased from history for a number of reasons.

"HIDDEN FIGURES is the untold story of Katherine G. Johnson (Taraji P. Henson), Dorothy Vaughan (Octavia Spencer) and Mary Jackson (Janelle Monáe)—brilliant African-American women working at NASA, who served as the brains behind one of the greatest operations in history: the launch of astronaut John Glenn into orbit, a stunning achievement that restored the nation’s confidence, turned around the Space Race, and galvanized the world.  The visionary trio crossed all gender and race lines to inspire generations to dream big."

Katherine Johnson from the MY HERO Gallery

Na Kia Boykin, Katherine Johnson's great-granddaughter, earned a perfect score of 600 on her math SOL as a third-grader at Palmer Elementary School. 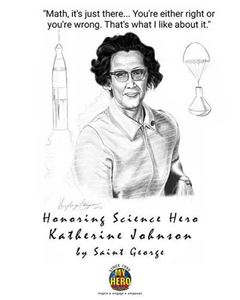 "I am aspiring to go into a career in computer science."

"Katherine Johnson has inspired me to become a physicist at NASA."

"Because of Johnson, I can now confidently do what I want with my life."

"It is my dream and goal to become an astronautical engineer for NASA."

Inspired by Katherine Johnson? Learn about a New Hero Every Day of the Year with the MY HERO Calendar

Students: Share Your Hero Essays, Films and Art through our Create Program