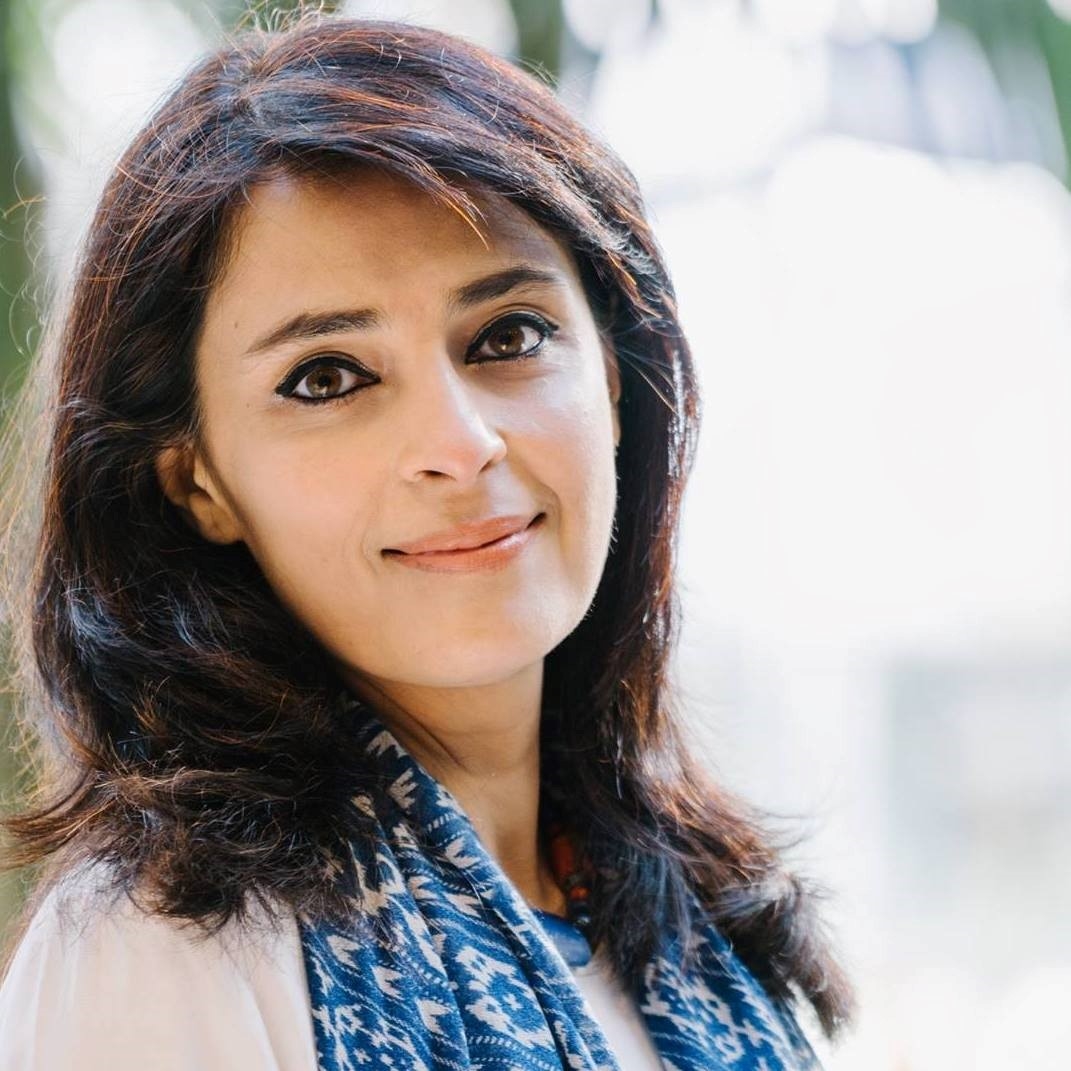 SamarMickey WiswedelMY HERO International Film Finalist double award winner, Samar Minallah Khan, born in Peshawar, KP, Pakistan, is a filmmaker, anthropologist and activist. In the media, she has been referred to as ‘The Savior of Soul,’ ‘Women who rock the world,’ ‘The Crusader with the Camera’ and the ‘Women that changed Pakistan.’

With a degree in Anthropology and an MPhil degree in Social and Cultural Anthropology from the University of Cambridge, Khan has been using film and other mediums to promote social change in Pakistan, predominantly advocating for women and children’s causes, for years.

“When I started studying at Quaid-e-Azam University, I had no idea how interesting anthropology could be. Then I went on to do my MPhil from Cambridge University and there I was introduced to ethnography. A link between anthropology and development was something I found relevant to Pakistan; I was extremely inspired by this particular genre. Before getting into documentary making, I worked as a freelance journalist. My first documentary was in Pashto. In 2003, no one was interested in seeing documentaries in Pashto; nevertheless, I got a great response. My first documentary was on a custom called Swara, where minor girls are given to enemies’ families.  It is an anthropological issue, but I had to raise awareness from a human rights angle. It was a challenge as I wanted general audiences to relate to it and not see it as propaganda against a culture; it had to be culturally sensitive. The kind of reviews I got the next day in the papers made me feel this is what I should pursue.”[I]

Over the past 20 years, Khan has hosted weekly shows, directed and produced talk shows, numerous documentaries and films to advocate for social change. ‘Swara - A Bridge over Troubled Waters’ won several national and international awards for breaking the silence around a practice that violates rights of girl children and women and led to making forced marriage illegal. Once the legislation was passed, Khan set out to ensure it was implemented and, as a result, more than 50 girls were rescued from different parts of Pakistan.

Khan’s campaigning, however, has led to numerous death threats. In 2006, she crossed the Taliban by releasing a video of the lashing of a 17-year-old girl in Kabal. Despite these threats to herself and her family (Khan is married and has two children), she has, steadfastly, continued to fight to end violence against women and girls.

Since then, Khan has tackled issues such as human trafficking, dowry, acid crimes, child domestic labor and forced marriage. She tells true stories about violence against women and the men who refuse to accept it: “I have a strong belief that it’s extremely important to engage men to shift culture. I believe that this is one of the most important answers to culturally-sanctioned forms of violence against women.”

Her strategies are innovative – not only has she produced films and documentaries, but she has also written and produced a music video featuring a renowned Pakistani artist that was the first pushtu/dari lullaby dedicated to daughters. Fellow Pakistani human rights activist Tahira Abdullah stated: “When we see her courage, and her refusal to be intimidated, then the rest of us feel that we must carry on, too.”[ii]

Khan’s recent award-winning project, utilizing Pakistani Truck Art to create visuals to spread awareness, has been recognized for its innovation and originality in various creative circles, including Cannes Lions International Festival of Creativity. With messages and images drawn from local culture and traditions, the trucks travel across the country and reach remote areas, serving as ‘Moving Billboards’ which are helping change mindsets and promote the empowerment of girls and women in Pakistan.

‘Khan and her team of truck artists have worked in collaboration with the Ministry of Human Rights, Government of Pakistan, Asian Development Bank (ADB's) Legal Literacy for Women, UNESCO, Pakistan, Right to Play on issues related to legal literacy for women in Pakistan, Child Marriages, Right to Inheritance, Right to Play, Right to Education etc. The messages are developed with the help of local artists and community members to ensure the cultural sensitivities and ownership.’[iii]

There is no doubt that, through all her differing mediums, Khan is not only a hero in her field but also a trailblazer who is challenging the status quo and who continues to change the conversation about women and girls in Pakistan. 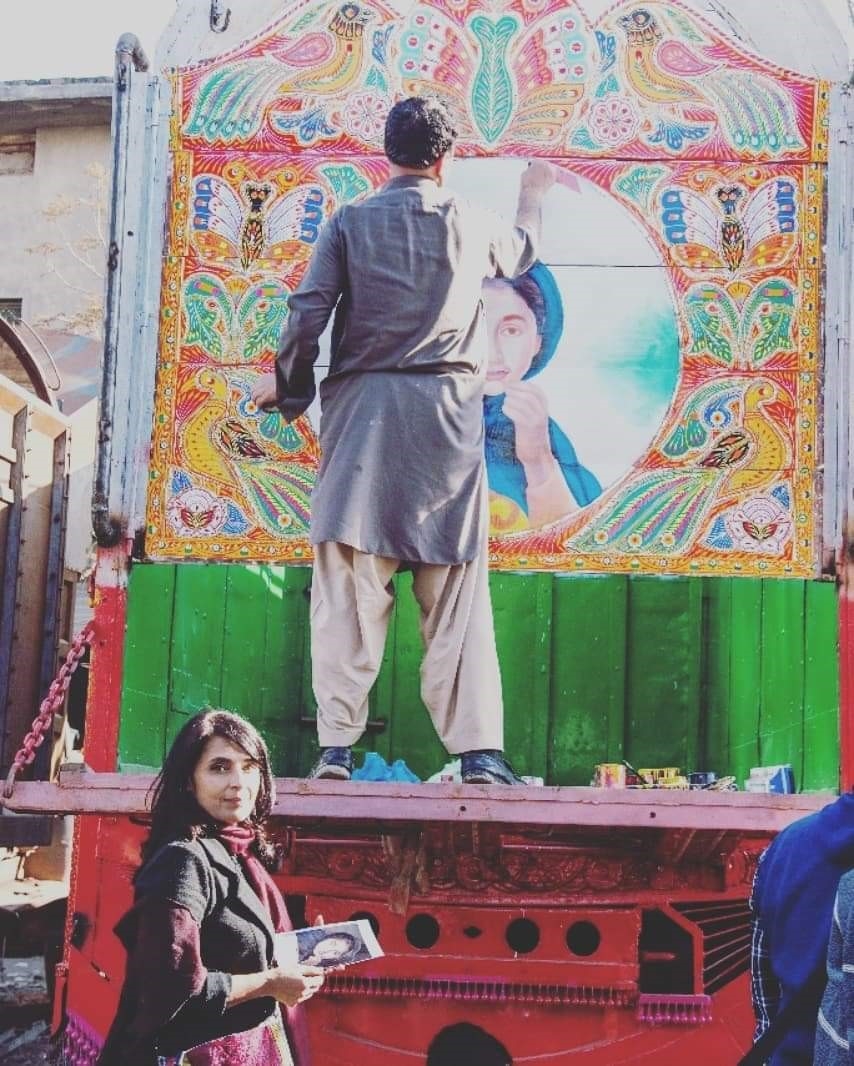 Khan’s film, ‘Outswing,’ about how learning to play cricket can change the perceptions of a community, has been selected as a finalist for MY HERO’s International Film Festival. Watch the trailer HERE

Khan is not the only activist hero in her family, her sister, Fauzia Minallah is a world-renowned children’s author, illustrator, artist, painter and the founder of Funkor Child Art Centre. Minallah believes in using the medium of art and books to promote peace and tolerance among children. She has been honored by MY HERO as a global arts educator and was awarded the Ron Kovic Peace Prize at the MY HERO Film Festival for her film, “Let Them Bloom” in 2010. Most recently, Minallah has been creating art and awareness to celebrate and protect old trees in Pakistan. To see more, head to the MY HERO page celebrating her work: Fauzia Minallah.

Said Ron, "In these difficult times when courage and hope are needed more than ever, there comes a little film from Pakistan that does it all and that says it all, bringing inspiration courage, and hope to us all. This film is a celebration of the human spirit and I hope it reminds people of the power they have as individuals.”

Said Eva: “I am so touched by watching this film…your work has been consistently looking to find the pearls, the treasures, that show that it's such a good thing to be human and that we are all part of a common destiny.”

On receiving the awards at the festival on December 4th, 2021, Said Samar: “I am honored to be associated with such inspiring names as Ron Kovic and Eva Haller. Thank you so much to the organizers of this festival which is very close to my heart because of the values it promotes. I am truly humbled… This is going to make a big difference to all of the wonderful girls who have been a part of this film.”

Khan is not the only activist hero in her family, her sister, and friend of MY HERO, Fauzia Minallah is a world-renowned children’s author, illustrator, artist, painter and the founder of Funkor Child Art Centre. Minallah believes in using the medium of art and books to promote peace and tolerance among children. She has been honored by MY HERO as a global arts educator and was awarded the Ron Kovic Peace Prize at the MY HERO Film Festival for her film, “Let Them Bloom” in 2010. Most recently, Minallah has been creating art and awareness to celebrate and protect old trees in Pakistan. To see more, head to the MY HERO page celebrating her work: Fauzia Minallah.