by Deborah Neff, MY HERO Staff writer from United States 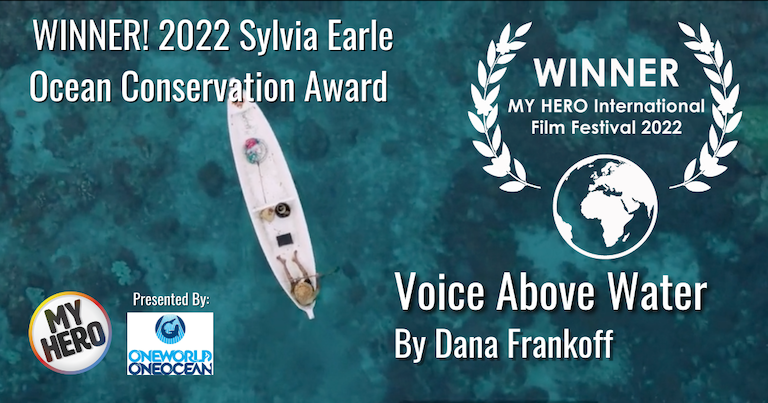 The 2022 Silvia Earle Ocean Award goes to Voice Above Water, directed by Dana Frankoff and produced by Turning Tides Films in Indonesia. The film features 90-year-old Wayan Nyo who does his part to clean the ocean and make the world a much better place.

This short, heartfelt film is a cinematographic wonder, containing much footage of the island’s long tranquil beaches, forested hills, and vast, sparkling seas. But its real gem is fisherman Wayan Nyo, who wants his ocean to be the way it used to be. He remembers schools of fish when he was growing up; now along with fewer fish he’s often catching plastic. Nyo’s been hauling plastic out of the ocean for over twenty years. Hearing from him in his own voice is both touching and inspiring, his smile to be remembered. This short documentary film by Dana Frankoff is not to be missed.

MY HERO presents the Sylvia Earle Ocean award each year to filmmakers who shine a light on heroes who are working to protect the world’s oceans. The award is named for Dr. Sylvia Earle, a world-renowned marine biologist and activist and sponsored by MacGillivray-Freeman Films’ Educational Foundation's One World One Ocean campaign. The winner is chosen each year by Barbara MacGillivray, the organization’s Director of Partner Outreach, and her team.

About Voice Above Water, MacGillivray said: “With the 90-year-old Indonesian fisherman turned environmentalist/ocean plastic eliminator, that film was definitely the most personal and emotionally engaging.”

Upon accepting the award, Frankoff said, "Sylvia Earle is such a hero of mine and it is an incredible honor to win the Sylvia Earle Ocean Conservation Award! Voice Above Water was made to encourage hope and motivation towards protecting our oceans. Thank you Barbara MacGillivray and MY HERO awards for helping spread awareness and sharing our film."

This year, two additional awards were granted — one for a student filmmaker and one for a film aimed at young audiences. Please Silvia Earle Ocean Award for more information about our winners.