The 17 Annual MY HERO International Film Festival was virtual and the connection between professional filmmakers, students, activists, heroes, teachers and friends of the project from around the world that attended was profound and truly inspiring.

All of the winning films are shared online with MY HERO’s global learning community. myhero.com/winners

Professional and Student Filmmakers from across the USA, Europe, Asia, The Middle East and Africa shared award stories of real-life heroes working to create positive change around the world in this short film festival that is now in its 17th year. 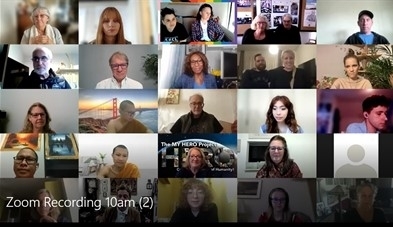 Here are the winners and a few highlights from our morning award ceremony.

MY HERO Film Festival director Wendy Milette and MY HERO Co-Founder Jeanne Meyers welcomed the virtual audience to the 17th International Film Festival and extended their gratitude to the MY HERO partners and sponsors who make the annual festival possible. Wendy explained that only clips of the winning films would be shown during the event and that participants should head to /winners to watch the full versions.

Mia Islas, Assistant to the Director and Intern from The University of Southern California, introduced winners in attendance.

In this short family-friendly film, Coach West (Carolyn) helps students navigate the emotional fallout of COVID-19. Carolyn Hodge-West attended the festival from Michigan and acknowledged the hard work and talent of the MY HERO Animation Interns that worked with her to create the final product.

In this film, a young bird and a sea turtle share madcap misadventures in a coming-of-age "buddy" story. Ernie Berger was on hand to accept the award from the UK. On receiving the award and on being part of this Festival he stated, “I feel very honored!”

Blueplanet VR is a curated collection of over 40 photogrammetric experiences of unique and powerful scenic and cultural heritage locations worldwide. Eric Hanson is a leader in volumetric VR and is bringing the vivid experience of visiting a cultural heritage across the globe to a virtual reality platform.

Eric explained: “I have spent my life being very affected by nature and landscape. I’ve always had this life where I worked in feature films and visual effects and so I finally merged those tow interests to create this title…you, though, do really need to see the film in VR where you can feel present in the scene. This project is a first of its kind, and I think people will find it very compelling as a form of virtual visitation of a myriad of unusual and powerful spatial outdoor locations from across the planet.”

Accepting Award: Claudia and Hendrik from The Jetlagged, who joined live from Germany

360 SEA PLASTIC is a film that demonstrates the impact that plastic waste is having on the local and global environment. The filmmakers immerse the viewer in environments that are heavily affected by plastic trash with the intention of raising awareness and challenging the viewers to rethink their plastic consumption, and eventually change their behaviour.

Said Claudia “It’s a pleasure and a joy to be here with all of you. Thank you so much for this award. It is a real honor.”

MY HERO2021 IFF Human Rights Is the Taliban's return the end of music in Afghanistan? by Cormac Walter O'Brien | UK

Accepting Award: From the UK, Cormac Walter O’Brien who worked on this film with the Thomson Reuters Foundation and in collaboration with the Afghan National Institute of Music

This impactful and heart-breaking film features members of 'Zohra', Afghanistan's first all-female orchestra and their founder who discuss their feelings as the Taliban take control, about America withdrawing its troops, what they anticipate is next for women and, ultimately, what might happen to music.

Said Cormack: “I am very honored, thank you so much for the award. I first filmed with the musicians of Zohra orchestra from Afghanistan's National Institute of Music in 2019 while on their UK tour. This piece, filmed just days after the Taliban takeover of Kabul via Zoom, tells their (current) story."

Along the scorching southern desert border in Arizona, it is estimated that only one out of every five missing migrants are ever found. This film is the story of one group of searchers, the Aguilas del Desierto, themselves largely immigrant Latinos. Once a month these volunteers—construction workers, gardeners, domestic laborers by trade—set out to recover missing loved ones referred to them by word of mouth, phone calls, or Facebook message.

Said Kristy: “Thank you for honoring us. The work of the organization was brought to my attention by of a colleague of mine who’s work as a scholar is looking at forensic empathy…to put a face to statistics and she told me about the group, Aguilas del Desierto. I was immediately engaged and interested – they are all volunteers and I was really struck by their efforts.”

This film is an invitation for all individuals to take a look at themselves and to dive deep within, reconnect with their soul and experience the profound power of life.

Said Angelika: “Thank you so much for the invitation and for the award. The film is 9 minutes in total. I invite people to watch it in its entirety as it such a deep and profound dive. It’s (ultimately) an invitation to dive deep within (yourself). It’s about transformation. Like a seed has everything in it to become a plant, I believe we too have everything in us to reach our full potential and Lotus is that - a reminder and an invitation.”

Drawing inspiration from visiting his native country, Guatemala, for the first time, Testimony is a film by Moisés García about how finding peace is of the upmost importance. While others find it in noise, some find it in the most silent of places.

Said Moisés: “It’s an honor to be here and to be a part of this festival and this journey. I never (thought) the film would reach out to so many people. It came out of pretty much nowhere…and I am truly happy you enjoyed it.”

Said Miranda: “This was a great experience for me. It was my first time working on a team. We were really hoping to influence other children about the dangers of vaping and make them see just how dangerous it is. I see a lot of people around me doing it. My age and younger.”

Accepting Award: Ian Zaretsky, Media Teacher at the STEAM Academy @La Presa who worked with the students via Zoom during lockdown.

The Quiet Classroom is a video poem that depicts the empty feeling of classrooms during the Covid19 pandemic but ends with a hopeful message about how we will grow through the Lockdown experiences and eventually return to the wonders of education.

The Future is Electric, a video directed by Aliana Shanks, Elijah Fera and Juan Duran. In this short, the students discuss the benefits of electric cars and send their teacher into a Back to the Future style time travel experience while giving information on their quest to change the future.

Growing Peace In The Middle East by Steven Hoffen

Accepting Award: Student, Steven Hoffen who was joined virtually by one of his heroes Hadas Lahav from Israel

Steven Hoffen, a 7th grader from New York is inspired by a visit to Sindyanna of Galilee in Israel - a unique non-profit organization led by a team of Arab and Jewish women working together to create social change from the ground up. He spends the year during the pandemic inspired to document the new hydroponics project at Sindyanna, which strives to enhance Arab-Jewish cooperation, while creating economic opportunities for Arab women.

Said Steven: “I was inspired to make this film because I really loved all of the people I met when I visited Sindyanna, and I really loved the food. I was also inspired by their hydroponics project. The way I got into documentaries was through watching David Attenborough on Netflix.”

Said Hadas: “It’s a pleasure to see such talent in your program. I am inspired. We will use the inspiring ideas to really promote understanding and to build bridges in our divided societies.” https://www.sindyanna.com/

This film explores the Buddhist philosophy of Dhana, which means giving. The true meaning of giving is explained by Monks offering a way of sharing life in harmony with our planet and one another.

Joining the festival from Thailand were Monk Bounma Buddanoy, Monk Jatuporn Simmali, Monk Surakiart Boonmatun who were delighted to have won fist place this year, having placed second in the Humanitarian category last year. Between them, they explained that the inspiration for the film came from the desire to share the Buddhist philosophy of giving, to remind the younger generation ‘that the act of giving is for everyone’ and to stress the importance of ‘loving and kindness.’

This is a music video for a song written to a child (the artist’s niece) and to humanity about righting the environmental wrongs of our forefathers. The duo made the video to inspire people to take care of the planet and used video footage filmed by friends from all over the world and from their previous tours.

Through magic and mishap, a new form of understanding and appreciation is formed in the bond of two mystical siblings.

Said Hampton: “With this film, we really wanted to inspire people in general, whatever situation they are in…The magic colliding makes something more beautiful than you can explain. Thank you so much for having me here. It really means a lot.”

MY HERO2021 IFF KittyKitty Richardson is a MY HERO intern, a talented filmmaker, musician, songwriter and activist. Kitty’s contributions to MY HERO include award-winning music video productions, short video portraits of heroes from the MY HERO calendar, outstanding interviews with winning filmmakers and original short films that profoundly explore her unique vision and perspective.

Said Kitty: “I am extremely honored and humbled by this recognition. MY HERO has been a place where I have grown and learned what it means to make the world a better place. I am extremely thankful for the friendship and guidance that MY HERO has given me.”

View all the winning films on MY HERO: myhero.com/Winners

Add your story, art, film and music to our global learning project: myhero.com/Start