"To be successful you have to have a passion."

In 1985, Dr. Robert Ballard and his colleagues designed a submarine that would allow them to descend to the depths of 3800 meters to find the most famous wreck of the twentieth century -- the bow of the legendary R.M.S. Titanic.

Discovering the sunken ship brought Ballard a lot of attention, especially from schoolkids who asked to accompany him on his expeditions.

Dr. Robert Ballard is more than an explorer; he is the visionary behind the JASON Project, a Web-based science course used by teachers around the country for kids in grades four through nine. There is also a program available to homeschoolers, as well as opportunities for kids to participate in actual explorations as "Argonauts."

Ballard has also worked as a Senior Scientist in the Department of Applied Physics and Engineering at the Woods Hole Oceanographic Institution, Woods Hole, Massachusetts, and as the President of the Institute for Exploration at the Mystic Aquarium in Connecticut. He has published many books, including Explorations, an autobiography, Graveyards of the Pacific: From Pearl Harbor to Bikini Island, The Eternal Darkness, and The Discovery of the Titanic.

Ballard has devoted much of his labor to the exploration of ancient wrecks. He believes that "there is more history in the deep sea than in all the museums of the world combined. People have this concept that the ocean is remote. But 12,000 feet, the average depth of the ocean, is only the distance from the Oval Office to the Pentagon... It's two different worlds, but it's not far." By using maps and deductive reasoning, he was able to locate two Phoenician ships that were nearly three thousand years old. Using a map, he "took a ruler and drew a straight line between Ashkelon and Alexandria," which is the route that these ships would have taken. Based on historical data collected at Harvard University, Ballard estimates that there are a million ships of antiquity in the deeps.

In February 2002, Ballard travelled to the Weddell Sea off Antarctica to search for Sir Ernest Henry Shackleton's ship, the Endurance, which sank in 1915. He and his crew had to break through a 21-foot ice canopy, then descend 9,000 feet into the water.

In a recent interview with the Los Angeles Times, Dr. Ballard stated that future projects he dreams about include finding Kublai Khan's invasion fleet, which was sunk northwest of Japan in a typhoon in 1281. He would also like to visit the Andes Mountains in Peru to search for the treasure that the Incas are supposed to have hidden beneath a lake to protect it from invading Spaniards.

Robert Ballard's childhood role model was Captain Nemo, the protagonist of Jules Verne's novel 20,000 Leagues Under the Sea. For Ballard, Captain Nemo was not only an oceanographer, he was a leader, a risk taker and a visionary.

In an interview with the online journal, Homeschool.com, Ballard explains how having this hero steered the course of his life:
"When I was about ten years old, my favorite book was, 20,000 Leagues Under The Sea. My hero as a little boy was Captain Nemo. I wanted to be an undersea explorer. Fortunately, when I told my parents, they didn't laugh at me. They actually encouraged me to live my dream. My parents told me, 'maybe you need to become an oceanographer if you want to become a Captain Nemo.' So I became an oceanographer. Then my parents said, 'Maybe you need to become a naval officer,' and I did. I used this as my guiding principle; it allowed me to go on and live my dream. I believe all of us have dreams; all of us should try to live our dreams."

Ballard's other heroes include several famous explorers: Captain James Cook, Charles Darwin, and Lewis and Clark. As he told the Los Angeles Times, "I've spent most of my life on pieces of the Earth where I was the first human being to be there, and I want to share that."

The JASON Project
Mystic Aquarium Institute for Exploration
Maria Victoria Ferrera: - was an Argonaut on Jason XV's journey through the Panamanian rainforest.
HOW DEEP can they go? - the RMS Titanic
Academy of Achievement - Read an interview with Dr. Ballard. The Academy of Achievement brings students face-to-face with the extraordinary leaders, thinkers and pioneers who have shaped our world.

Robert Ballard contributed his hero story to MY HERO: Extraordinary People on the Heroes Who Inspire Them. Your purchase of this book helps to support this not for profit educational web project. 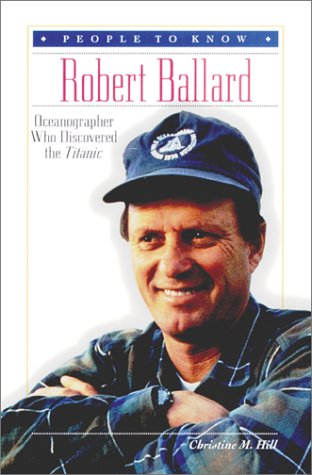 Adventures in Ocean Exploration: From the Discovery of the Titanic to the Search for Noah''s Flood
Robert Duane D. Ballard, Malcolm McConnell